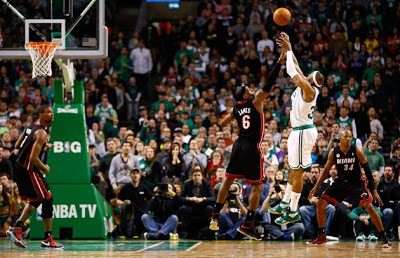 Paul Pierce hit a game winning jumper with 30 seconds remaining in a double overtime thriller to propel his team against Miami, snapping a six-game losing streak.

LeBron James scored a game-high 34 points and forced overtime with a clutch 3-pointer in regulation. Ray Allen scored 21 points off the bench in his first return to Boston since signing with Miami as a free agent over the summer.

Allen received a standing ovation when highlights of his career with the Celtics were shown on the big screen above center court during the first timeout of the first quarter. He waved his hand to the crowd just before the timeout ended while fans stood on their feet.


"When I saw it, just all those emotions came streaming back from all the great things we did here," Allen said. "I'll always be a Celtics in my mind." 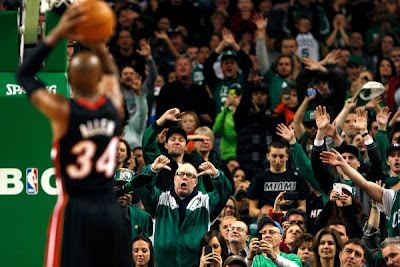 Allen eventually entered the game, and was booed.

Rondo, who was scratched out of the lineup less than a half hour before the game, learned that he had torn the ACL of his right knee and would miss the remainder of the season. Coach Rivers broke the news to his team in the locker room just moments after the win.


"Everyone was really happy for the win," Pierce said. "It brought a dark cloud in this room when you heard the news." 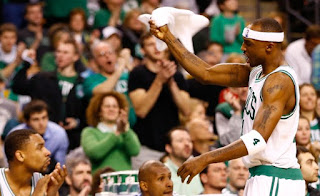 Without their starting point guard, the Celtics knocked off the Heat by playing tough defense and got a lift from their bench. Jason Terry, who finished the game with 13 points, came in handy when he scored a clutch running-layup after James' three-point play gave the Heat their lead. Terry cut Heat's three-point lead down to one with less than a minute before Celtics made a key stop to set up Pierce's game-winning shot over James.

Although his team will be without Rondo for the rest of the season, coach Rivers remains positive about the second half of the season.


"You can write the obituary. I'm not," coach Rivers said. "We won tonight, so, the way I look at it is, we're going to stay in there."

Celtics' next game is Wednesday night at TD Garden when they take on the Sacramento Kings.

Jeff Green showed up to play in the biggest game of the season. The box score doesn't do him justice because great one-on-one defense isn't exactly a statistical category in NBA, but forcing LeBron James to take jump shots as well as he did was what kept the Celtics alive. He also scored 11 points, hit a big 3 pointer in the fourth quarter to cut Miami's lead to one and dunked on Chris Bosh very badly; which never gets old... Barbosa clocked in a season high 30 minutes and played a crucial role in overtime. While Celtics' offense began to look fatigued, stagnant, and couldn't move the ball effectively against Miami's defense, Barbosa entered the game and prevented Miami's trap at the top of the key. He finished with nine points, four assists and one steal. With Rondo out for the season, Celtics need Barbosa and Lee to step up and play big minutes in the back court.
Posted by Josue Pavon at 7:27 PM