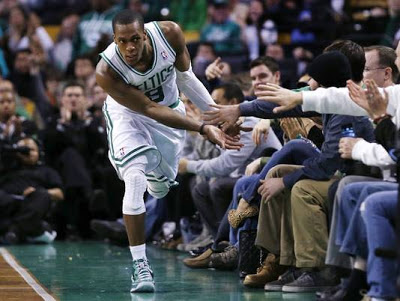 Rajon Rondo posted his third triple-double of the season as he led the Celtics to a 100-89 win over the Bobcats last night at the Garden for their sixth consecutive victory.

Rondo scored 17 points with 12 assists and 10 rebounds in his 26th career triple-double. Celtics started the game with a 13-2 run against the Bobcats and ended the half with an 11-point lead.

Although the Bobcats were able to tie the game in the third quarter, the Celtics responded with a 7-0 run and never trailed during the game. 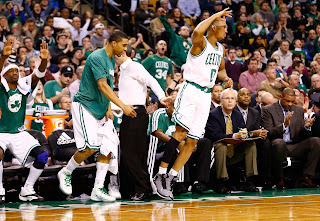 Paul Pierce chipped in with 19 points and Avery Bradley added 16 for the Celtics. Kevin Garnett was ice cold throughout the game but helped his team defensively and grabbed 10 rebounds.

Hakim Warrick and Ramon Sessions led the Bobcats in scoring with 16 a piece. They were two of six players who scored double-digits for their team.


"Every coach I talk to about (the Bobcats) say the same thing: 'They just keep playing,'" coach Rivers said. "It's hard to do but it's nice to see."

Down the stretch, Celtics made great stops against the Bobcats and took care of the basketball. One thing about that has been impressive throughout their six-game winning streak is how they've taken care of the ball. Celtics committed only 14 turnovers last night.

Celtics will host the New Orleans Hornets Wednesday night, where they hope to stretch their current winning streak to seven games.

If Garnett scored only 7 points in a game one month ago, that usually resulted in a Celtics loss. Bradley stepped up big last night offensively. He knocked down four three-pointers and reminded his opponents that he can get going quickly when left wide open... Garnett, who needed 13 points to tie Patrick Ewing for 16th on the NBA's career scoring list is now six points away. It'll be great to see Garnett reach a historic milestone Wednesday night at The Garden.