Thoughts from a Broken Celtics Fan

In what is beginning to turn into the Celtics season from hell, check off blowing a 27 point lead off the bucket list for the 2012-13 season.

I was going to write a up a review for this game but as a Celtics fan, I am literally in shock from what I just witnessed. So, I'm going to vent, not only about the game but about this atrocity of a half season for this Celtics team so far this year.

I'll start with tonight's game against the Hawks. What the hell happened? These are the same pushovers that the C's rallied back from 19 points down to beat only a month ago. Actually, they are minus their best guard Lou Williams, who absolutely killed them in the first game. The Celtics have absolutely dominated the Hawks over the years.

Bottom line is any time you play the Hawks, there is no excuse to lose the game. I understand they may have a better record than the Celtics, but c'mon they are the friggen Atlanta Hawks. If Josh Smith were to wager on the game tonight, I am positive he would have Pete Rose'd the shit out of it and picked the Celtics. He may be a moron on the court, but he knows a sure bet when he sees one.

So cut to the middle of the second quarter. The Celtics are enjoying a wonderful 27 point lead and decide to start doing whatever the hell they want. They settled for long jumpers, decided to let down their guard defensively and showed a total lack of killer instinct.

Lets make one thing clear, blowing a lead that big is absolutely unacceptable, but stranger things have happened on a basketball court. I could see if it was Kobe going off, or Lebron taking over, or Durant doing his best MJ impression and single handeldy dragging his team from looming doom and disaster. But no, who do the Celtics allow to look like the second freaking coming of Larry f'-in Bird? Kyle "I swear I actually have teeth not just a mouth guard glued to my gums" Korver.

EVER THINK ABOUT ACTUALLY PUTTING A HAND IN THE GUYS FACE OR RUNNING HIM OFF THE GOD DAMN THREE POINT LINE. ALL HE CAN DO IS SHOOT THREES!!???!?
Seriously, Kyle "I secretly like when people say I look like Ashton Kutcher because he's a dreamboat" Korver had 27 points and put the Celtics to shame tonight.

They should be ashamed of themselves after this debacle of a game and a debacle of a season. The other day when Doc said he may have to make some changes and send some people packing, I thought it was a little harsh, but tonight I totally understand why he would feel that way.

In my eyes there are three people that you do not trade and everyone else is expendable and there are a few I would help pack their bags for them.

You can't trade Paul Pierce. Legacy alone he's earned the right to stay and retire a Celtic. It may be time to examine his role on the team soon but he has to stay. Also you don't trade Avery Bradley or Jared Sullinger. They are young and both have potential to be building blocks to the next generation of Celticis basketball.

EVERYONE ELSE IS ON THE MARKET.

If you can find the right deal for KG and Rondo right now, as tough as it would be to watch them go you'd have to pull the trigger. And don' t even get me started with Jeff Green, Jason Terry and Courtney Lee. If someone is willing to take one of them for a big man it's an automatic deal in my mind.

Then there is Brandon "which way did he go George?" Bass. Talk about an overpaid bust. Everyone was in shock that we got a player like him for the headache of Big Baby last season, (including me) but now he is the biggest underachiever on the team. This is another bone head signing by Ainge. Last year, Bass had a decent year and was actually one of your most consistent players on the court, not spectacular but steady. Then he had that one friggen game against the 76ers in the playoffs and he's worth more than 6 mil per year? You know what he's done with all that cash? Instead of working on his game this summer he actually hired somebody to replace his eyeballs with slow motion cameras so that now everything around him is moving at the same pace he is. Seriously, Kendrick Perkins release looks like Ray Allen's compared to Bass' slow ass shot. There's a fun game I like to play when Bass gets the ball at the elbow (because you know he's gonna shoot every single time from there), it's called see how many beers you can drink before he releases the basketball? My record is 8 beers in the time it took him to shoot. The worst part about the guy is that last year he was automatic from that friggen spot, this year he's shooting awfully from the elbow. No sorry, the actual worst part is if he can't do that he's useless because lord knows he can't grab a friggen rebound.

Enough on Bass because the best thing about him blowing the big on this year is we get to see more Sullinger on the floor.

As I take a deep breathe and try to collect my thoughts, it is dawning on me that this could be the worst Celtics season that I have ever endured. People may want to point to the 07 season, where the C's were the laughing stock of the league, but I would take that over what we are witnessing now.

That 06-07 team was filled with 20 something's just trying to make a name for themselves in the NBA and you knew it wasn't going to be easy heading into every game. Yet they still showed up and played hard and when they won it was a great feeling. (Until the last month of the season when it was clear they were tanking to try to get Oden or Durant, but let's leave that out for the sake of argument)

The problem with this team is that they think it's easy. This Celtics team takes nights off, plays off, and it seems like weeks off. The worst part about it is they have so much talent. That's what kills every Celtic fan out there that feels betrayed by the lack of effort they see nightly. They should be so much better but just aren't.

Not sure what's next on the horizon for this team but. If this season continues on like this it could be the sign of a very very very long year.

I'm going to go put a Brandon Bass jumpshot and watch it in super slow mo and see if I can put a whole 30 down...It's that kind of night for me and season for the C's. 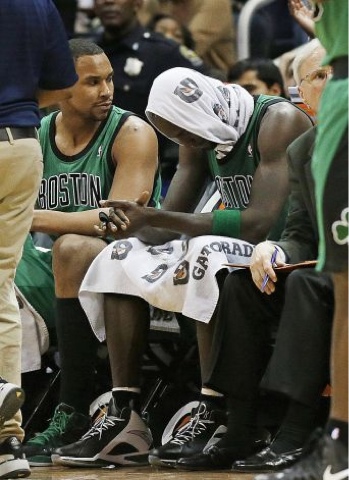