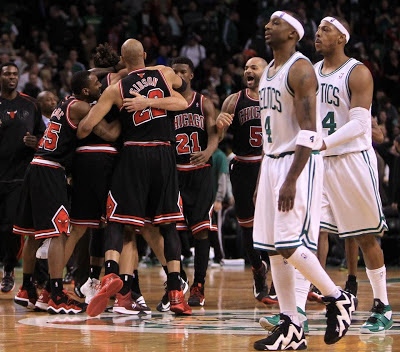 Marco Belinelli took an off-balance fadeaway jumper with three seconds left in overtime to give the Bulls a victory over the Celtics, in what was a thriller at TD Garden last night.

After a Rajon Rondo jumper with less than 40 seconds remaining in the fourth, the Celtics regained the lead, 86-84. Soon after, the Celtics gained an 88-86 lead, the Bulls won a jump-ball between Paul Pierce and Joakim Noah which set up a Kirk Hinrich jumper that sent the game into overtime.

In overtime, Jason Terry hit a jumper with 12 seconds left that gave the Celtics a 99-98 lead.

In what appeared to be a broken up play, Bulls' Carlos Boozer gave a pass inside to Belinelli for a falling-down-while-I-shoot game winning fadeaway.


"That's natural." Belinelli said. "I know it's a crazy shot, the fallaway. The ball went in."

Boozer had 19 points and 20 rebounds, and Noah finished with 14 points and 13 boards. Bulls won their 14th straight road game on a Friday. They haven't lost on the road on a Friday since April 2011. 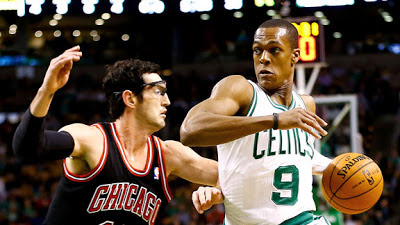 Celtics trailed the Bulls all night but earned their first lead with less than five minutes left in the fourth quarter. Rondo was on fire. He scored all of his 30 points in regulation and had nine in the fourth. He led the Celtics' fourth quarter serge.


Rondo dished out seven assists to go with his 30 points, and Garnett had 16 points and seven rebounds.


"We had the game in our hands a couple of times and it just slipped through our fingers both times," Pierce said. "Just the little things. It just goes to show you that the little things can prove costly in this league if you are not on point throughout the whole game. They beat us tonight." 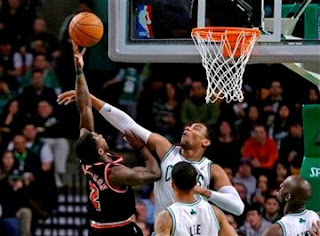 Celtics kept the game close because of their tough defense in the post. Dealing with Noah and Boozer in the paint was a challenge the last time the Celtics played the Bulls. But this time at TD Garden, the defense forced 21 Chicago turnovers.

In the fourth quarter the Celtics had the stops they needed to put the Bulls away for good but couldn't put together a run to knock them out. Pierce and Terry missed their shots in the final minute and things got tougher in overtime after Rondo leaped for a loose ball but committed in his sixth foul in the process.


The offense has been in a slump in the past two games but what has been keeping the Celtics in close games is the defense and their rebounding. It's continuing to improve even without Avery Bradley, who sat out of last night game due to sore ribs.

Celtics play again Sunday night in Detroit against the Pistons.

Jared Sullinger continues to have big games for the Celtics. His 15 rebounds is what kept him in the game throughout the overtime. He gave the Celtics extra possessions and did a good job pissing off Boozer... It was great to see Barbosa getting extra minutes. Even though it was because Bradley was out, he replaced him in the starting lineup and finished with five points, three rebounds and one steal in 15 minutes... It was great to see Terry hit a big shot with less than 20 seconds left in the game, it's what he's suppose to do, especially in games where Pierce can't get it going. Don't get me wrong though, nine points in 27 minutes still isn't going to cut it. And Rondo isn't going to score 30 every night. It's a no-brainer that role players have to come to play in order for this team to be successful. Oh and speaking of role players, did Jeff Green play last night?