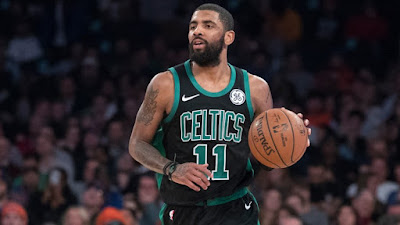 While rumors continue to fly about where Kyrie Irving will take his talents to this summer, it was announced on Thursday afternoon that the Celtics guard was named to the All-NBA Second Team.

In just his second season in Boston, Irving averaged 23.8 points and 6.9 assists (career-high) in 69 starts during the 2018-19 campaign, that most believed ended on a sour note after a second-round knock out to the Milwaukee Bucks in the NBA playoffs.


Congratulations @KyrieIrving on being named to the All-NBA Second Team 🙌🎉 pic.twitter.com/mLxPdejaZ8
— Boston Celtics (@celtics) May 23, 2019


This is Irving's second selection for All-NBA honors in his eight-year career, as he was named to the All-NBA Third Team during the 2014-15 season with the Cleveland Cavaliers. Irving becomes the first Celtic to be chosen to an All-NBA squad since Isaiah Thomas back in 2016-17, when he was selected to the Second Team.

Irving's selection comes just 24 hours after the NBA announced that his Celtics teammate Marcus Smart was named to this year's All-Defensive First Team.