Kyrie Irving on Game 3: 'This is what Boston traded me for' 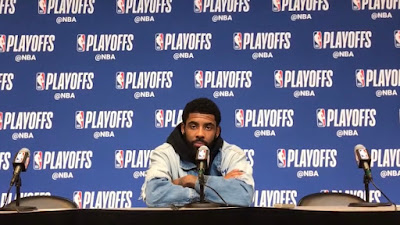 MILWAUKEE -- For a team that suffered from a 21-point loss against the Bucks in Game 2 of their best-of-7 series, the Celtics seemed rather breezy throughout their postgame interviews.

After becoming the only undefeated team in the playoffs (5-0), Boston dropped its first game of the against the Bucks in a blowout fashion before players like Kyrie Irving, Marcus Morris and Al Horford spoke briefly about what went wrong in the second half of their 123-102 loss, and gave reporters the sense that the defeat simply boiled down to the Bucks making shots.


"They came out with a sense of urgency," Morris said. "Played well, they made shots. They shot 50 threes, they made 20-something or so. That was probably the game right there."

But what did the Bucks do differently in the second half -- where they went off on a 31-4 run -- that blew the Celtics out of the water before the final frame?


"It wasn't anything differently than what we saw in the first half. I just think they were scrambling, playing frantic defense and we got a little frantic, took some quick shots that led out to transition baskets," Irving said. "We gave them some pretty easy plays but they made the right reads as well. Like I said, when you attempt 47 threes, it's absurd in an NBA game but that's the way they've played all season. We just have to be ready to weather the storm. Be ready for Game 3."

Did the Celtics lack a sense of urgency against the Bucks?


"I felt like we were playing at a high level, just have to give them credit," Horford answered. "They played better than us tonight.

"We have to look at the film. Sometimes you look at things one way, look at film and it's a little different. But we have to defend the 3-point better, that's one thing I can tell you and go from there."

Perimeter defense is definitely a good place to start. The Celtics allowed 20 3-pointers, which equated to slightly less than half of Milwaukee's point total (123). Khris Middleton (7-of-10) led the way while Eric Bledsoe and Brook Lopez connected on a combined 6-of-9 from deep.

Boston failed to close out on the Bucks' shooters in the second half the same way we saw it defend the arc in Game 1, coupled with the defensive approach Milwaukee had entering the second half -- where it strung together defensive stops and turnovers that were converted into easy buckets. The Bucks made defensive switches after halftime with a primary focus in mind -- shadow Irving and throw bodies at Horford.

The pick-and-roll plays between the two veterans established open shots and easy lanes for their teammates throughout the first two quarters until Ersan Ilyasova, who pressured Horford and George Hill, who stayed in front of Irving, returned five minutes into the second half and led the defense that eventually triggered a shooting spree for Milwaukee's shooters.


"They've got the guys that can do that," Brad Stevens said after the game. "They did it last year, a lot. That's an easy thing for them to adjust to. I thought they did a really good job of it. They even switched Mirotic a little bit, switched Ilyasova a little bit and kept Lopez as a protector. That's where they've been great all year. They have a lot of versatility, they have a lot of defensive versatility. Everybody knew Game 1 was not going to repeat itself. They did a good job of owning the space on both ends of the court.

Add MVP-candidate Giannis Antetokounmpo to the fire and the Celtics found themselves on the wrong end of a blowout. The Greek Freak scored 23 of his 29 points in the second and third frame on 7-of-12 attempts, including 2-of-3 from deep and 7-of-8 from the charity stripe.

The trio of Giannis, Middleton and Bledsoe combined for 78 points, carrying the offense while the Bucks collectively buckled down defensively throughout the second half. However, Irving can't wait to respond in Game 3, after his lackluster 9 points on 4-of-18 performance.

He's said it plenty of times throughout the regular season and reminded reporters once again after Game 2 -- Irving relishes in these moments and has already moved onto Friday night at TD Garden, where the Celtics will look to grab a 2-1 lead in their Eastern Conference Semifinals series.


"This is what I signed up for," Irving said. "This is what Boston traded me for. Being able to go back, get back in the trenches, get ready for another battle on Friday -- that's what you live for. Basketball is fun when it comes like this and you have to respond and this is the type of basketball you want to be playing this time of year. We'll look at film but I already have a clue of the way I want to play going into Game 3."