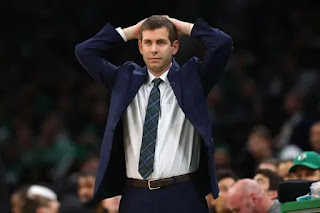 What Brad Stevens is seeing from Giannis Antetokounmpo and the Bucks is nothing new to him.

As one of the league's leading superstar, Antetokounmpo continues to prove why he's a leading MVP candidate and why he's the most talented player in the Eastern Conference Semifinals series between the Celtics and the Bucks. However, Boston's defensive approach hasn't been the same as what we saw in Game 1 in Milwaukee.

Clearly, the Bucks have made adjustments. But it wasn't The Greek Freak who made changes in Game 2 and 3, it's been his teammates. For the first time in the series, the Bucks shot at a 50 percent clip from the floor while the Celtics struggled to keep up with Milwaukee in transition, especially in the second half.

Stevens talked about it in a conference call with the Boston media over the weekend.


"They've been doing it all year," Stevens said. "They run the five spots, they're good at it, they're very disciplined at getting to their spots. From the outside looking in, it doesn't matter who's in what spot. Sometimes they'll bring Lopez off the stagger out of the opposite corner and that's a unique cover for a big. Sometimes Giannis will bring it up the wing and the guard in the corner will sort of step up or hand it off to the corner. They have those spots and it doesn't matter who's there -- they are playing position-less to the nth degree.

"Giannis is basically their point guard in a lot of ways. Obviously, Bledsoe and Giannis split that duty with their ability to get downhill and break people down but the way that both of those guys play is like a lead guard and everybody else just falls into those spots. That's nothing new. You have to help appropriately off of him and you have to help appropriately when he has the ball."

There's no quick fix solution for the Celtics. It's not something specific that's going to make all the difference but what Stevens believes is the best approach for his team heading into Game 4 is match Milwaukee's intensity, play-for-play.

Boston isn't going to prevent Antetokounmpo from scoring 20-plus points, it's not going to stop Khris Middleton from draining 3-pointers but what the Celtics can do is limit the Bucks, much like they've been doing throughout the opening frame of all three games this series.

However, Stevens wants to see his team keep it up for all 48 minutes of Game 4 on Monday.


"The idea is to execute, perform. Especially this time of the year, on both ends of the floor against elite competition," Stevens said. "We have to be great at focusing on our task at hand on each possession. If anything distracts from that, you're going to be in trouble. We go back to what do we need to do, what makes us better or more efficient for the whole 48 offensively? And then defensively, how do we make it as tough as possible, knowing Giannis is going to get downhill some. Middleton is going to make shots that are well-contested, other guys are going to have opportunities and you challenge those as well as you can.

"But they're going to hit some -- it's just limiting that as much as possible. Those are things all within your control that you're trying to do because as the competition gets more and more elite, which again this is elite competition, your margin for error increases."