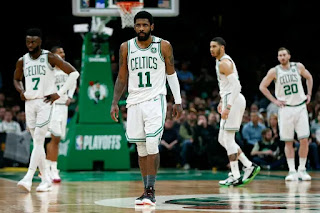 He reminded everyone countless times throughout the year and then made sure people remembered that it's the reason Boston traded for him back in 2017.

The Celtics believed Irving was ready to leave the shadow of LeBron James behind in Cleveland and start a new chapter in his career -- to lead a contending team in a city that doesn't settle for anything less than championships.

In Boston, athletes who lead their team to title contention are revered around these parts, and while Irving didn't always say the right things throughout the course of the regular season, one promise he made that most believed was the proverbial postseason switch that he was going to flip and turn Irving into the superstar who could carry a team through the playoffs.

The Celtics, a roster loaded with talent and plenty of complementary players, has found itself with its back against the wall searching for answers while on the brink of elimination. The lackluster performance that Irving walked away from with 10 seconds left in the final moments of Game 4's 113-101 loss against the Bucks left Celtics fans feeling hopeless and unsure of what to make of Irving's struggles and an empty promise of a dominant playoff run that all of a sudden looks bleak and is on the verge of extinction.

Irving, who led his team with 23 points Monday, took 22 field goals to get there while going 2-of-7 in the second half throughout the midst of a 15-point hole that the Celtics could never climb out of.


"Who cares?" Irving said when asked about his shooting woes. "I'm a basketball player, prepare the right way. Like I said, it's a little different when your rhythm is challenged every play down. You're being picked up full-court, they're doing things to test you. The expectations on me are going to be sky high. I try to utilize their aggression against them and still put my teammates in great position while still being aggressive. I'm trying to do it all.

Irving certainly hasn't been playing like one of late. He's a combined 19-of-62 in the past three games of the series, continues to struggle down the stretch when the Celtics need him most and carried a nonchalant, and somewhat carefree attitude throughout his postgame press conference.


"I missed shots, shots just didn't go in," Irving said. "You go out and prepare, like I said, sometimes they go in, sometimes they aren't. They do a great job of loading, too. They're making the paint look crowded whenever I'm driving or wherever I'm going on the court, seeing two or three bodies, sometimes four. Still kicking it out and trying to make the right plays, just continue to do so. Now, it's time to get ready for Game 5."

It's do or die for the Celtics from here until the end of their best-of-7 series. One more loss will send them home for the summer, one more win will bring them back to TD Garden for Game 6, in the meantime, we're left wondering if Irving may have played his final game in Boston in a Celtics uniform.

Irving, an impending free agent who's expected to opt out of the final year of his contract, up to this point has come up short on one promise -- of delivering a signature playoff performance -- but will he come up short on his initial promise? It was a promise that was made prior to the start of the regular season when he said that he's planning on re-signing with the Celtics during the off-season.

In less than two months, Irving's legacy in Boston can either go from an All-star talent who left a city disappointed and wanting so much more or one that's only completed one chapter of the story, with the rest still unwritten.