Marcus Smart is listed as questionable for Game 4 vs Bucks 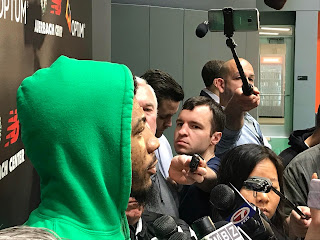 Marcus Smart may return to the Celtics sooner than anyone anticipated.

He spoke to the media Sunday afternoon at the Auerbach Center, following team practice, and said he's hopeful he'll be able to play Monday night in Game 4 against the Bucks.


"I've been cleared yesterday," Smart said. "We didn't do any 5-on-5 yesterday, we did a little 3-on-3 and everything felt fine so now we're just waiting to see how my body recovers from that and then go from there."

What are the chances we'll see you in Game 4?


"We're not sure yet," Smart replied. "I think I'm getting really close. Tomorrow is still up for grabs, like I said, I have to see how I feel tomorrow morning. Hopefully, everything feels fine but as we know injuries can be a little tricky sometimes but hopefully that's not the case (this time)."

While seeing Smart on the floor Monday night would be great for the Celtics, Brad Stevens is preparing for Game 4 without Smart in mind.


"It's totally up to the training staff and how he feels," Stevens said. "There's nothing to do with me. I'll get their cues and go from there. It doesn't change much from what we plan on doing."

If Smart is available Monday, he will be on a minutes-restriction and play in five-minute stints, Stevens added. It's been four weeks since Smart suffered from his oblique injury, just before the start of the postseason.


"It's exciting, he's a big part of our team," Kyrie Irving said. "He alleviates a lot of different pressures out there throughout the game. (He) makes my job a lot easier so whenever you have the possibility of him returning it's always positive."

Smart back in the Celtics lineup in Game 4 would be huge for Boston. After seeing how dominant the Bucks were offensively in Game 2 and 3, the Celtics sorely miss Smart's defense in the back court.

If Smart is unable to go in Game 4, there's a strong possibility we'll see him in uniform for Game 5 in Milwaukee.