Why Kyrie Irving's future in Boston remains up in the air 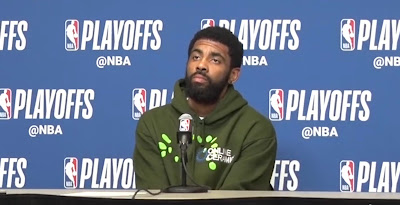 Kyrie Irving's future in Boston looks as murky as it has ever looked.

Is it fair to expect Irving to make some sort of commitment to the Celtics moments after losing Game 5 and being bounced out of the playoffs by the Bucks? No, absolutely not.

That's just not who Irving is, which is fair. We expected this kind of response when the initial question about his future in Boston was proposed:


"I'm going to be honest, I'm just trying to get back to Boston first, safely," Irving said. "See my family, decompress, do what human beings do."

However, hearing Irving go on and on about what transpired this year without offering any kind of solace or appreciating for the organization and coaching staff has to be one of the most troubling signs if you're Danny Ainge and the Celtics.  Irving's decision is far beyond an easy one.

Between now and July 1, his free agency process will be the focal point of the Celtics' off-season for a franchise trying to piece together what went wrong and what the best course of action should be, moving forward. After starting off the postseason winning five consecutive games, the Celtics dropped four straight in a gentleman's sweep by the hands of the Bucks -- a disappointing end to a season with so much promise back in September.


"A lot of lesson to take from this season," Irving said. "From Day 1, training camp, until now. It just felt like a rush. I tried to enjoy as many moments as I could. It really comes down to great team basketball, who's playing better at a certain time of the year and the connectivity, able to respond, you know they showed all year why they were who they were."

Milwaukee also did a terrific job of containing Irving and forcing him to turn in some of the worst shooting performances of his playoff career. He finished with 15 points on 6-of-21 attempts from the floor Wednesday night, his worst game since Game 2 -- when he went 4-of-18 and finished with 9 points.

Irving shot at a 30 percent clip on 25-of-83 throughout the final four games of the series. Making matters worse, he didn't even mention the Celtics as a viable option throughout his decision-making process between now and July 1, when he was asked a two-part question:

How disappointed are you about how the season ended and is Boston a place you'd consider coming back to?


"Truth be told, it's no time to be disappointed," Irving said. "You take your lesson, you take the ass-whopping that they handed us and you move on. It's a basketball journey, obviously, you want to keep playing but they put a haul to that and they deserved the series, and they played like they wanted it. I'm looking forward to seeing them go to the Eastern Conference Finals and playing their next opponent. It was a great opponent for me to play against for the rest of my career because I know I won't forget something like this -- the taste of feeling defeat in this type of style -- being down 1-4, I haven't felt.

"For me, it's just moving onto the next thing and just seeing where that ends up."

Right now, the chances of seeing Irving back in a Celtics uniform doesn't look good. While a lot can change in 7-8 weeks, the fact of the matter is, Kyrie had an opportunity to declare Boston as potential front-runner and elected to keep everyone guessing.

Guessing if his time with the Celtics was something he can build on with the organization moving forward or if it was just a learning experience that he'll take with him when he eventually moves on to his next destination.