Kyrie Irving complains about the officials, Antetokounmpo, 'It's getting ridiculous at this point' 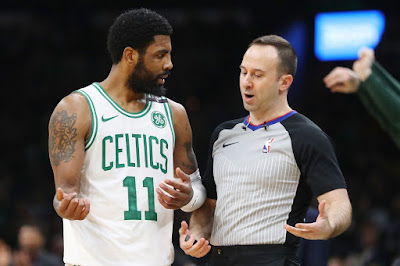 The Celtics didn't want to pin their Game 3 loss to the Bucks on the officials.

They did the best they could to hide their frustration with how the game was called Friday night. However, following their 123-116 loss, the topic was brought up to Kyrie Irving during his postgame press conference and the All-Star point guard couldn't help himself.


"It's inevitable," Irving said. "A guy comes down six times in a row, gets free-throws, what are you really going to do? It's slowing the game down, so the run you would hope to make in a quarter like that doesn't happen. I mean, (he) shot 22 on the game, I mean, it's getting ridiculous at this point -- it's just slowing the (expletive) game down."

Irving wasn't the only one who felt like Giannis Antetokounmpo received the MVP-candidate deluxe package treatment by the hands of the refs. His veteran big man, Al Horford expressed his frustration from the Celtics locker room.

Antetokounmpo netted 16-of-22 from the free-throw line Friday, on his way to a game-high 32 points to go with his 13 rebounds. He got to the rim quite a bit throughout the night, considering he only attempted one shot from behind the arc and not a lot from the mid-range.

But so did his teammates, as the Bucks finished with 52 points in the paint, and while Milwaukee's 36 free-throw attempts wasn't that far off from Boston's 32 attempts, countless fouls against the Celtics in the second half ultimately drove them crazy and eventually took them out of the game throughout crucial stretches.


"I'm not even going to comment on it," Jaylen Brown said. "They shot a lot of free-throws, it is what it is, you move on. We have to set the tone for the next game."

Irving was asked if this was the worst officiated playoff game he's ever played in.


"The refs have a difficult job," Irving said. "Obviously, I could sit up here and complain. We know the disparity and what it is but I'm not going to put all the emphasis on the refereeing. I think there are a lot of controllable things on our end that we can be better at. Obviously, the officiating is going to be part of it, you wish that things can go your way but they didn't. We have to be able to respond in a better circumstance. We just have to respond better and I think we will do that going into Game 4."

Head coach Brad Stevens refused to use the officials as an excuse for losing Game 3.


"I don't complain about officials," he said. "We have a lot of stuff we have to do better and they have a hard job. We focus on us and the controllables -- that's the bottom line."

Boston failed to control its double-digit deficit, which ballooned out to 17 points in the second half. George Hill's 21 points off the bench outscored the Celtics' second unit, he got to the rim with ease throughout the second half but when it came to scoring in the paint, it all starts and ends with The Greek Freak.

The Celtics have to find a way to slow down Antetokounmpo. Otherwise, this series could be over quickly.