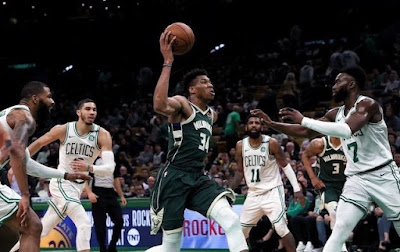 The Celtics are one loss away from officially going on vacation for the summer.

The Bucks cruised to a 113-101 Game 4 win at TD Garden Monday and will head back to Milwaukee with an opportunity to close out the Celtics Wednesday night.

For the second consecutive game of the series, the Celtics leaped out to a double-digit lead in the first half and saw it erased before halftime. Giannis Antetokounmpo (15) and Khris Middleton combined for 28 first-half points, while the Celtics clung onto a two-point lead (49-47) at the break before the Bucks turned it up a notch in the third quarter -- where they outscored their opponent, 33-23.

Trailing the Bucks by 12 points with 7:19 left to play, the Celtics put together a quick 7-0 run to trim their deficit to five before the Bucks responded right back with a run of their own on their way to another 12-point lead with under four minutes left to play.

Antetokounmpo took one final trip to the free-throw line after throwing down a thunderous exclamation point at the end of what was a very poor showing by the Celtics and another dominating second half by the Bucks.

"The Greek Freak" scored a game-high 39 points, including 17 in the final frame to go with his 16 rebounds. Kyrie Irving's 23 points led the Celtics but he finished 7-of-22 from the floor along with 10 assists.

Al Horford added 20 points and Marcus Morris had a double-double (18 points, 14 rebounds) but it wasn't enough to overcome Milwaukee's stifling defense -- which forced the Celtics to shoot 37.8 percent from the floor, including 9-of-41 from deep, a new franchise playoff record for most threes attempted.


"If we're honest with you, when Giannis and Khris (Middleton) go to the bench, you're concerned," Bucks coach Mike Budenholzer said. "But you have confidence that that group can play."

Boston didn't take advantage at the start of the third quarter when both Antetokounmpo and Middleton sat down with four fouls each, as the Bucks reserves of George Hill (15 points), who scored nine in the third and Pat Connaughton (nine points and 10 rebounds) took over to give Milwaukee a 9-0 run and a 78-86 lead with 1:16 left in the quarter.


"It's always hard to take out Giannis; let's start there. But at the end of the day, we are conscious of trying to keep him fresh," Budenholzer said. "It's hard to find the words (for) what he does for our team, both ends of the court. He's special, but he's very hungry. He wants more, and he's playing that way."

Despite a second straight double-double from Jayson Tatum (17 points, 10 rebounds) and 16 points from Jaylen Brown, it was the Celtics' bench that was outscored again by Milwaukee, 32-7 in Game 4.

Irving has not helped matters much in the team's three losses, shooting 19-of-62 overall, including 4-of-20 from 3-point range since his 26 point performance in Game 1. The Celtics All-Star left the court with less than 10 seconds remaining on the clock, as boo's rained throughout the Garden.


"I know probably to the outside world we probably don't stand much of a chance," said Al Horford. "We're at a low point as a group, I guess that's the reality. We'll have to bring that fight to them on Wednesday."

Down 3-1, the Celtics will look to keep their season alive in Game 5 at the Fiserv Forum. TNT will have the tip-off on Wednesday night.

Celtics were outscored 66-44 in the paint, while the Bucks shot 44 percent from the floor, including going 8-of-37 from 3.

Marcus Smart made his return from an oblique injury suffered back on April 7, the Celtics guard finished with three points on 1-of-7 shooting, two assists and a rebound in a limited 15 minutes off the bench.