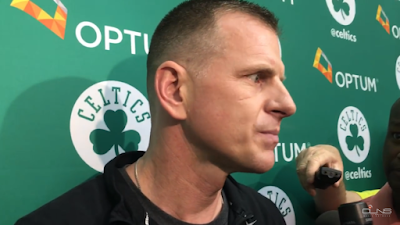 Celtics rookie Robert Williams' NBA career is already off to a rocky start.

Two days removed from being formally introduced to the Boston media as a member of the Celtics, the no. 27 overall pick missed his first team practice. Williams made a headed back to Louisiana sometime between Friday and Sunday, and missed his flight back to Boston.

The Celtics are gearing up for this week's Summer League, which is slated to start on July 6. Celtics Summer League head coach Jay Larranga spoke to the media shortly after practice.


"I think everyone's disappointed," Jay Larranga said. "You want to get everything off to a good start in the first day, but we'll handle that internally and move forward."

Practice lasted nearly two-and-a-half hours Sunday. Larranaga explained how the first days are very important, it's when all players are introduced to the Celtics system.

This comes a week after Williams overslept before his conference call with the media. Then came Friday's press conference -- which couldn't have gone better for the rookie. He said all the right things and is confident he will prove his doubters wrong.

However, Williams heading back home before his first practice is what will be remembered the most about his weekend.


"I've never met him," Larranaga admitted. "So I can't really speak on anything but my personal interaction. I think with every rookie that comes into the NBA it's really a race to maturity and some people are further ahead like Jayson Tatum. And a lot of guys have some work catching up to do. So Robert, like I said, when he gets here tomorrow we'll start working with him. And I'm just excited to get to meet him."

Tatum, who was in attendance at practice on Sunday, has stated he will not participate in this year's Summer League but still got a workout in with the youngsters.