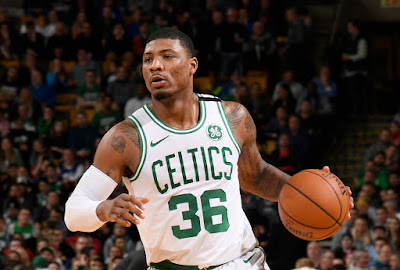 Marcus Smart and the Celtics are on the verge of agreeing to a long-term deal that will keep the back up guard in Boston for the foreseeable future.

According to ESPN's Adrian Wojnarowski, Celtics president of basketball operations Danny Ainge and Smart's agent, Happy Walters, are close to finalizing a four-year deal worth $46-50 million.


This comes weeks after Smart was reportedly disgusted that he hadn't heard from the Celtics about a possible contract extension throughout the first week of free agency. While there were a few teams reportedly interested in offering a deal to the restricted free agent, Celtics head coach Brad Stevens reassured the media that Boston wants to keep Smart around.

Still, most expected the Celtics to force Smart to opt in to the final year of his current deal, worth $6 million, before becoming an unrestricted free agent in 2019. Now, Boston appears to be committed to Smart long-term as they're looking to lock him in through 2022.

This comes hours after Kawhi Leonard -- a player the Celtics were interested in acquiring -- was dealt to the Raptors for DeMar DeRozan in a blockbuster deal that was finalized Wednesday morning.