Christian Arcand: 'LeBron may not be the easiest guy to work with' 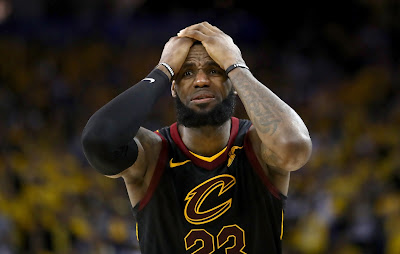 When the news of LeBron James joining the Lakers broke on Day 1 of NBA Free Agency, the speculations of which superstars would follow suit immediately followed.

James is forming another super-team was the assumption before elite players such as Paul George, DeMarcus Cousins and Chris Paul ultimately decided that teaming up with James in L.A. wasn't for them.

The Thunder inked George to a four-year, $137 million deal, the Rockets and Chris Paul agreed to a four-year, $160 million extension and Cousins accepted a $5.3 million, one-year contract to play alongside Kevin Durant, Steph Curry and the champion Warriors.

However, this isn't the first time we've seen superstars stray from the idea of joining forces with James. As Boston 98.5 The Sports Hub's Christian Arcand reminded co-hosts Josue Pavon and Sean Dutra on the Causeway Street Podcast, LeBron may not be the easiest teammate to play with.

While most considered George -- a California native who grew up dreaming to play for the Lakers one day -- teaming up with James a no-brainer for the All-Star veteran, the 28-year-old scorer ultimately picked playing with Russell Westbrook over the best player in the world.

"The last year in Cleveland, LeBron the GM didn't exactly cover himself in glory there and now it just seems like back around 'The Decision' time we all knew there was going to be guys who wanted to go and play together [with him]. With LeBron now, just sort of seems like those days, I wouldn't say are over -- guys are still teaming up -- they're just not teaming up with him."

Along with George, the Thunder also retained Jerami Grant before adding big man Nerlens Noel and are hoping to make another splash by adding free agent wing Tyreke Evans to their roster. In his ESPN mini-documentary series, George stated he wants to sign with a team that he believes will give him his best chance of winning an NBA title -- clearly, he didn't think playing with James in L.A. was the place for him.


"Maybe it's a personality thing, maybe George was really that impressed by Sam Presti and the operation they got over in Oklahoma City," Arcand explained. "I guess that's possible. But I don't know, you just can't help but notice what we used to consider an obvious thing in the NBA off-season -- 'Oh yeah, who wouldn't wanna go play with LeBron? Watch out for the big free agents, they're all gonna go to Cleveland or go to Miami or go to wherever.'

"Now, it's sort of 'No, not exactly,' guys are going elsewhere. Durant, he went to Golden State. Now, everybody is staying in their corner and LeBron's the one on the move. And he's not going to an already set situation, he's trying to build another one from scratch. It's just a strange thing for him to want to do at this stage of his career."