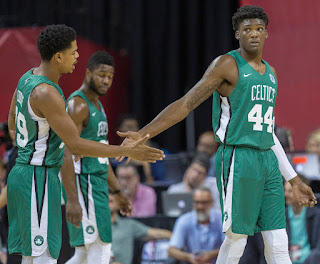 The Celtics kicked off their Summer League schedule with a win over the 76ers Friday night in Las Vegas but the attention quickly shifted from the outcome of the game to the status of rookie Robert Williams.

Boston's first-round pick got off to quick start in the Celtics' 95-89 win. After Guerschon Yabusele committed three fouls in three minutes, Williams entered the game and made an immediate impact by converting a pass down low for an easy dunk and drained a mid-range jump shot.

But after banging knees with another player, Williams suffered a left knee contusion. He exited the game towards the end of the first quarter and never returned.

He scored four points in over six minutes.


"I had a case of tendinitis and it kind of got bumped," Williams said after the game. "I've been feeling sore a little bit, but the trainer has been doing a great job giving me what I need. But it just so happened I got hit in that exact same spot, so just taking a precaution."

Williams also added that as frustrating as it was to be forced to watch his new teammates finish the game without him, he understands that it's very early in his NBA career and that his body and health ultimately comes first.

In a small sample size, Williams showed flashes of promise for the Celtics. Seeing him in pick-and-roll sets proved just how useful he can be in the paint -- where he can finish strong -- while also showing off his raw shooting touch.

Led by Semi Ojeleye and Yabusele, the Celtics topped Philly without Williams. They led the way with 16 points a piece and Jabari Bird supplied 14 points to go with his eight rebounds.

Sixers shooter Furkan Korkmaz put on a clinic, draining eight 3-pointers on his way to a game-high 40 points. The second-year forward is fighting for a role with the Sixers next season and certainly made a statement Friday night.

Hopefully, we'll see more of Williams in the Celtics' second game against the Hornets on Saturday. Williams status is questionable.