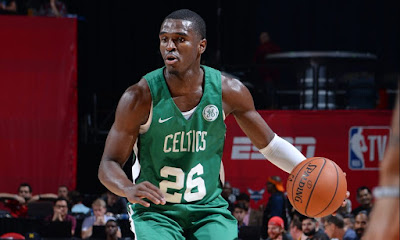 Coming off of a two-way contract that allowed him to spend no more than 40 days in the NBA with the Celtics while spending the majority of his 2017-18 season in Portland, ME as a member of the Red Claws, Bird has hopes of signing his first full-time NBA contract. His last contract was a one-year deal, which makes Bird a free agent with no promise of a deal before the start of the season.

Boston, of course, has the option of offering Bird either another two-way deal prior to the upcoming season or inking him to a permanent spot on the Celtics roster. In the meantime, Bird is making a strong case for the latter.

After dropping 15 first-half points, he finished with 24 points in Saturday night's Summer League game against the Nuggets before Boston dropped its first loss of the summer, 82-69. Bird converted a pair of eye-opening dunks in the first half, as he drove the baseline and completed a reverse slam on one play and drove down the lane and jammed it home on another.

Bird tallied the majority of his points by blowing past defenders and finishing strong at the rim. His 24 points was a team-high while he received little-to-no help offensively from the rest of his teammates.

No other player scored more than the nine points that was supplied by undrafted guard Pierra Henry, while Guerschon Yabusele (seven points) and Semi Ojeleye (three points) combined for 3-of-12 from the floor. Third-year guard Malik Beasley and undrafted forward DeVaughn Akoon-Purcell each led the Nuggets with 19 points as Denver cruised to a 13-point win.

As for Bird, his chances of making the final roster this fall are looking better due to his offensive prowess. He's proving he's able to create his own offense (9-of-17), can rebound the basketball and give head coach Brad Stevens another scoring option off the bench.


"You gotta compete each and every day because somebody's coming for your job," Bird explained. "Being on a two-way last year I was hungry, trying to prove myself. Going into the Summer League as a free agent, I'm trying to prove myself again. Hope to make the roster -- whether it's a two-way or one through 15, I'm just trying to be an NBA player full-time, really"

However, depending on whether Marcus Smart stays or signs elsewhere, Bird is going to have to keep fighting in order to squeeze onto the squad. The signing of Brad Wanamaker does hurt Bird's chances a bit but if the Celtics ultimately decide to part ways with third-string guard Shane Larkin, that would be a fitting role for Bird to take over.

The Celtics will take Sunday off before taking on the Hornets Monday, which will be the last contest before the Summer League playoffs.