Breaking down the Marcus Smart signing, what it means for the Celtics 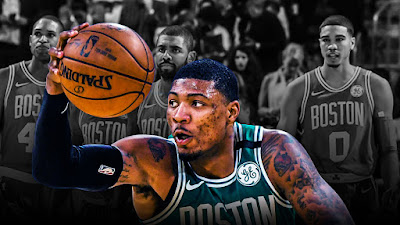 The Celtics locked in Marcus Smart this week, a move that signifies their commitment to keeping the roster's core intact. And it's also a move that speaks to how important Smart really is.

Amidst speculation that Boston was reluctant to extend Smart's contract this summer, Celtics president of basketball operations Danny Ainge committed to his back-up guard to the tune of a four-year, $52 million deal. It's a contract extension that cements Smart -- a vital piece of the Celtics' defensive identity -- to Boston's championship-chasing window that is expected to stretch the length of Smart's new deal and further.

It was a top priority of the Celtics off-season to bring him back, according to Ainge, and with guys like Kyrie Irving and Terry Rozier entering the final year of their contract, the Celtics were wise to take care of Smart sooner rather than later. As for the price; it's not only a bargain, it's also an asset.

Considering what the going rate two years down the road for a player of Smart's caliber on a championship contending team will be, the price isn't steep. An average of $13 million per year for a top-notch defender that scores in double-digits and will be entering his prime throughout the duration of his new deal makes a lot of sense if you understand Smart's value.

For a team that's destined to reach the NBA Finals, the Celtics will rely on Smart's defense against the best back court in the league -- Steph Curry, Klay Thompson of the champion Warriors -- or any other team that stands in the way of claiming their first title in a decade.  His ability to make game-winning plays in the fourth quarter, tremendous defensive stops against some of the league's elite talent while taking on a leadership role off the bench makes him worth every penny.

Smart's contract is also ideal for if or when the Pelicans decide to part ways with Anthony Davis -- a player the Celtics have kept their eyes on from afar for quite some time. While the Celtics are destined to make deep playoff runs year after year, Smart's stock will continue to rise throughout that span.

Aside from Irving, the rest of the Celtics core -- Smart, Gordon Hayward, Al Horford, Jayson Tatum, Jaylen Brown and Aron Baynes are signed through 2020. Irving and Horford are the only members of the projected starting lineup not signed through 2021 -- a clear indication that the Celtics brass is all in on this current group.

Also, Smart's $13 million makes matching salaries a lot easier if Boston decides to trade for a max player like Davis -- granting the Celtics cap flexibility. No matter how you slice it, it's a win-win.