Brad Stevens: '[Smart] knows we all really want him back' 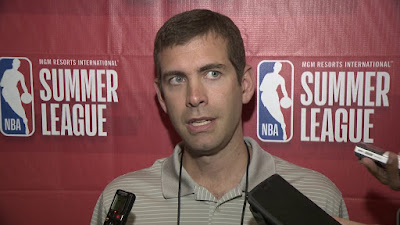 Celtics head coach Brad Stevens caught up with the Boston media in Las Vegas on Monday and addressed Marcus Smart's future with the franchise.

Smart, who was reportedly upset with the Celtics for not offering a contract extension one week removed from the start of free agency, will be receiving an offer sheet from the Kings relatively soon, according to NBC Boston's A. Sherrod Blakely.

Stevens said he spoke to Smart two days before the start of free agency, expressed how much he'd love to see him back next season and knows that Celtics president of basketball operations Danny Ainge and co. feel the same way.


"He was in town for his camp, I saw him over at the new practice facility," Stevens explained. "I've talked to him a bunch. I'm not involved in all the negotiation part of it and all the numbers part of it, and he knows that. He also knows we really want him back. So I know our front office has worked hard to be communicative and go from there."

After offering restricted free agent Zach LaVine a four-year, $80 million contract -- a deal that will be matched by the Bulls -- the Kings have just under $20 million left in cap space.