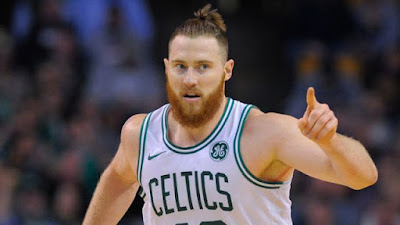 The Celtics wasted no time in retaining one of their own at the start of free agency.

Moments after midnight, it was announced that Aron Baynes agreed to a two-year/$11 million deal. The second year is reportedly a player option, according to Yahoo! Sports' Shams Charania, who first reported the deal via Twitter.

Baynes, who earned a starting job at center last season, made a name for himself as a defensive anchor down low along side All-Star big man Al Horford in his first season in Boston. He averaged six points, 5.4 rebounds and became one of the leaders in the Celtics locker room.

After drafting a potential rim protector in Robert Williams, the Celtics can now mold the young prospect and allow guys like Horford and Baynes to take the rookie under their wings. Baynes expressed how happy he is about his new contract.

The Celtics will now shift their attention to restricted free agent Marcus Smart, who is reportedly being considered by teams like the Mavericks, Kings and Nuggets.