Report: Marcus Smart is "disgusted" he hasn't heard from Celtics since the start of Free Agency 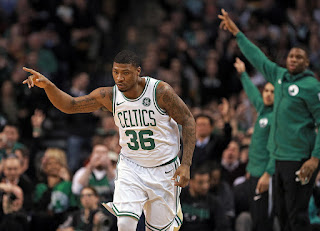 While NBA free agency has been heating up around the league, Marcus Smart still hasn't received a single phone call from the Celtics.

After reaching an agreement with Aron Baynes in the opening minutes of free agency, the Celtics haven't had a conversation with Smart's camp, and according to a source Smart is very frustrated that there hasn't been any communication from Celtics president of basketball operations Danny Ainge.


"He loves the Celtics, but with these crickets he's hearing, he's hurt and disgusted by it," said the source. [Boston Herald]

Ainge, who declined to comment on the matter, still has a $6.05 million qualifying offer on the table to retain matching rights for Smart. However, the back up guard assumed the Celtics would have reached out about a longer contract extension by now.


"He would have thought there would have been some kind of three-to-four year deal from them to show they're interested," said the source. "But the qualifying offer is the only one he has received, and there's been no talk since free agency opened. He's most disappointed that there has been no reaching out from their end.

"He's just hurt and frustrated that Danny hasn't reached out. That's the most discouraging part of this whole thing. The last contact was a few days before free agency started." [Boston Herald]

Smart, who is currently in Dallas with his mother, Camilla, has moved into an apartment near the clinic where she is receiving chemotherapy treatment for bone marrow cancer. He recently posted a picture Thursday night offering his support.


The anonymous source also mentioned Jazz guard Dante Exum's new contract extension -- worth three years, $33 million -- a surprising move by Utah for a player who has only played 14 games last season. However, according to the source close to Smart, it isn't about the money.


"Marcus doesn't look at it that way -- Oh, look what Dante got -- but he does look at what he brings to the table for (the Celtics)," the source said. "And anyone who knows Marcus knows that he brings it all the time. Everyone knows he loves Boston. It's his kind of place -- loyal fans, a hard-nosed group. But there has been no progress in negotiations, regardless of what you might have read. That's very untrue."