Isaiah Thomas reached out to Danny Ainge before joining Nuggets, 'I'd love to come back' 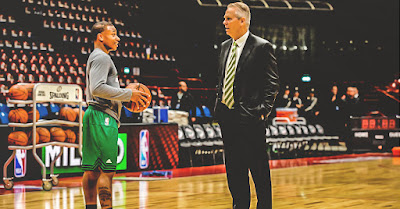 Before he ultimately signed with the Nuggets in early July, Isaiah Thomas reached out to Celtics president of basketball operations Danny Ainge.

They shared a 15-20 minute conversation, Thomas told ESPN's Adrian Wojnarowski. It was a brief talk where Thomas entertained the idea of coming back to Boston.


"If the opportunity is there, I would just like to let you know that I'd love to come back," Thomas told Ainge.

Ainge, who was in the process of working out a new deal for restricted free agent Marcus Smart at the time, was open to the idea of seeing Thomas back in a Celtics uniform. Ainge wanted to re-sign Smart before making an official offer to bring back his former All-Star point guard.

However, Thomas came to an agreement with the Nuggets before Smart inked a four-year, $52 million deal just last week.

While that may be the case, Thomas still managed to rehash the resentment he felt one year ago when Ainge and the Celtics dealt him to the Cavaliers in exchange for Kyrie Irving. Plagued by his hip injury, Thomas had an underwhelming season -- one that ended in Los Angeles and was cut short to season-ending surgery.

It was a devastating blow. For a player who is one year removed from when he was an MVP candidate, a one-year, $2 million contract isn't exactly what Thomas envisioned back when he was in Boston.

He spoke to Woj about those times while admitting that although he shouldn't have played in the postseason, he also didn't like the way the Celtics treated his hip injury.


"If I didn't play in the playoffs, I'd be OK," Thomas says. "I'd be getting paid. I'd be who I am -- who I was. But you couldn't tell me in that moment in time -- with everything I was going through -- that, OK, I should just sit out. I don't think Boston went about it the right way, as well.

"But at the same time, it was hard for me to sit out. I just lost my sister, one of the closest people in my life. Basketball was the only thing that was going to help me out. I played until I literally couldn't play anymore. And that was not a good business decision if I was looking in the long term, but I was looking in the 'right now.' That's just what it was.

Thomas will get his chance to prove he can still play at a high level in a reduced role with the Nuggets this year -- a role that Thomas understands isn't going to change throughout the season. Head coach Michael Malone, who coached Thomas with the Kings in 2013-14, assured Thomas that Jamal Murray is the starting point guard and that wasn't going to change.

However, being an NBA starter is the least of Thomas' worries. This upcoming season is about one thing -- getting back to being the player he used to be.


"I'm not worried about starting or coming off the bench now. I'm worried about playing well and showing the world who I am again," Thomas said. "Once the people see that I can play -- and play at a high level still -- they won't be able to deny me next summer. They won't be able to deny me what I bring on the court and off the court for an organization."