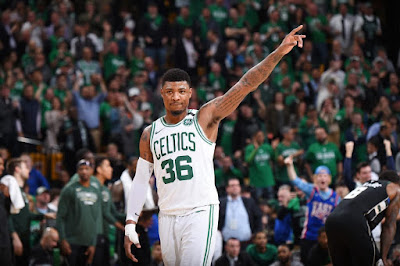 The Kings are interested in acquiring free agent guard Marcus Smart and are prepared to make an offer.

According to NBC Boston's A. Sherrod Blakely, the Kings have shifted their focus towards inking a deal with Smart after coming up short in their efforts to sign free agent guard Zach LaVine.

The restricted free agent was offered a four-year, $80 million deal from Sacramento before the Bulls matched the offer sheet to keep LaVine in Chicago.


Source: After striking out on Zach Levine, the Sacramento Kings are preparing to put together an offer #Celtics Marcus Smart.
— A. Sherrod Blakely (@ASherrodblakely) July 10, 2018


This comes after last week's report claiming that Smart was disgusted with the Celtics front office for not talking to him about an extension. While there's no word on the terms of the offer, the Celtics -- just like the Bulls did with LaVine -- can match Sacramento and keep Smart in Boston but the price tag will makes all the difference, of course.

The story broke while the Celtics were taking on the Hornets in Las Vegas Monday night. Smart was in attendance taking in the game along with teammates Jaylen Brown and Terry Rozier, while Danny Ainge was also seen a few sections away from the trio.