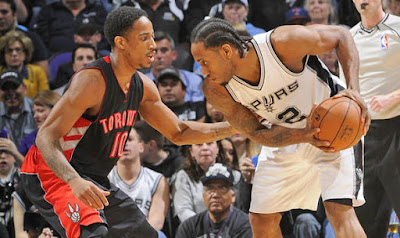 The Raptors and Spurs agreed on a deal to send Kawhi Leonard to the Raptors in exchange for DeMar DeRozan.

According to ESPN's Adrian Wojnarowski, the Spurs will also be sending guard Danny Green to Toronto while Jakob Poeltl and a protected 2019 first-round pick will be heading to San Antonio.


Leonard, who will become a free agent in 2019, doesn't plan on signing an extension with the Raptors but will head to a lighter conference in the east and team up with All-Star point guard Kyle Lowry. The duo will lead a Toronto team with NBA Finals aspirations in the same division as the Celtics -- the early favorite -- alongside the up-and-coming Sixers and make one heck of a competitive division that's certainly a cut above the rest of its contemporaries.

With LeBron James out of the conference for the first time in his career, the top three teams in the Atlantic Division -- Celtics, Raptors and Sixers -- will now include Leonard, 27, who brings a championship pedigree to counter another one-time champion in Kyrie Irving.