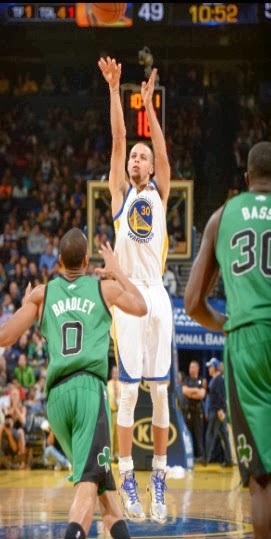 Oakland - Celtics came into Oracle Arena having lost the first three of their current five game west coast road trip, and the last six overall. Even though they held Stephen Curry to 7-for-18 shooting (3-for-8 from three-point range), no shot was bigger than the go-ahead jumper with 2.1 seconds remaining that lifted the Warriors past Boston 99-97.
Golden State coming off of a seven-game road trip where they finished 6-1, were looking to go on a much needed break with a win.


After Curry came off the pick-and-roll with David Lee before hitting his patented high arc shot over Kris Humphries, that would bring the home crowd to their feet, Gerald Wallace missed a game winning 3-pointer at the buzzer, sending the Celtics to Portland with their seventh consecutive lost.


"D-Lee set a great screen and I found a nice little bit of daylight to knock it down," Curry said after the game.


Andre Iguodala had 22 points, seven assists and five rebounds, while Curry finished with 19 points, seven assists and four rebounds. Andrew Bogut grabbed 13 rebounds for Golden State, who are off until Wednesday when they play Denver.
Boston on the other hand, had played its best game of their road trip as Jeff Green (24 points, 11 rebounds), Jared Sullinger (21 points, 11 rebounds), and Kris Humphries (16 points, 14 rebounds) all finished with double-doubles. Despite the poor shooting of Jordan Crawford and Avery Bradley, who went for a combined 6-for-24 from the field, they kept the game close even with standing a 19-3 run by the Warriors at the end of the third. 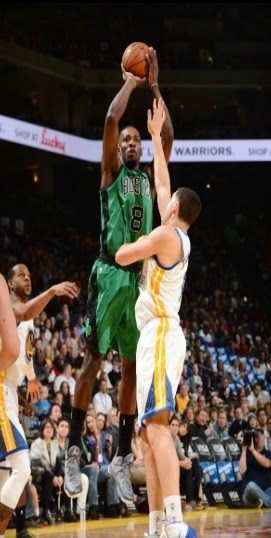 Down 13, the Celtics never backed down, especially after big shots by Green and Crawford, and a Humphries block that cut the lead to 89-88. Once again Golden State tried to pull away but another three by Green had Boston down 94-93 with 2:13 remaining. When Jared Sullinger lost the ball on a possession where they had a chance to go ahead, Iguodala made a field goal and Harrison Barnes free-throw that put the Warriors up 97-95 with 19.6 seconds left.


Green made a running layup that got a friendly bounce, tying the game at 97 with 11.6 seconds to play. Then a Curry and Lee pick-and-roll forced the switch between Humphries and Bradley, leaving Avery to pick up Lee and Curry hitting a another game winning jumper over Kris. The last play where the Celtics could have tied it or gone for the win was fumbled by Green, leaving Wallace to pick up the ball and throw up a three that was wide left. Game over.


Celtics will wrap up their road trip tonight in Portland when they take on the Blazers who are 27-9. They will try to finish on a good note, tip-off is at 10:00 PM.


The Celtics shot 45% from the field to the Warriors' 41%. Boston outscored Golden State's bench 31-21. Before last night's tip-off it was reported that Rajon Rondo would make a return on January 17th against the Lakers at the TD Garden, which he and Brad Steven both denied. Earlier in the day, the story broke that the point guard would definetly would come back before the All-Star game which is on February 16.