Boston - In the 48 hours since an emotional filled evening at the TD Garden, it turned out the way most had in visioned that it would be.

Paul Pierce and Kevin Garnett were more than satisfied with the welcome back they received from the Boston fans.


From the two video tributes, thank you signs in the crowd, to the standing ovations and the chants that echoed through the arena for most of the night. It makes you think, these two Celtic legends deserved better than what they got. They should still be here because they both wanted to retire in green.

But at last the NBA can be a cruel business where loyalty is only meant for stars such as Dirk Norwitzki, Tim Duncan and Kobe Bryant. But what about Paul Pierce, why didn't he get the same treatment after his 15 seasons in Beantown?

We may never know the answer to that question.

In case Sunday night was your first look at Pierce and the Brooklyn Nets, and you thought six points on 2-10 shooting was the 'norm' for the The Truth then you probably didn't see his 33 point performance last night when he went 7-for-10 from three point range against the Raptors just 24 hours removed from "the toughest game" he's ever played. It's safe to say Pierce still can hang with the best of them.

On Sunday night Paul Pierce hit a key 18-foot jumper with 2:38 to play to put Brooklyn up 78-70. But it was Kevin Garnett (played six years in Boston) who made the play of the game with 17 seconds left, by stealing the ball from Rajon Rondo and wrapped up an already special night by scoring the Nets final field goal on a dunk that sealed an 85-79 win over the Celtics. 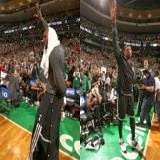 "I knew they needed a three at that point and I just played the passing lane," Garnett said. "I thought I was going to get caught, but I got it."

On a night that started with an ovation during pregme shootaround, and then continued during the Nets' introductions where KG and Pierce were the last two players introduced.

But one of the loudest cheers of the night happened during a video tribute for Garnett in the first quarter during a time out with 2:25 left while he stood near the Brooklyn bench with a towel draped over his head. The home crowd erupted once more after his classic "Any-thing is POSSIBLLLLLLLE!!" portion of the video from 2008 when he captured his only title with the Celtics by beating the Lakers in game six of the finals.

He smiled, pounded the left side of his chest and waved several times to the fans. As the tribute concluded with words  that read "Thank You KG" across the jumbo tron, and chants of "KG" continued even after the timeout was over.

"This was way over the top," said the 19 year veteran. "The only thing that comes to mind is unbelievable. I didn't expect anything like that for myself. It shows the type organization this is. I couldn't put it into words...I had lumps in my throat. I tried to focus as much as I could on the game, but this was over the top. I couldn't put that into words."

The tribute to Pierce at the end of the first 12 minutes of the game drew an even louder ovation, as he looked up at the video above center court that covered everything from the day he was picked 10th overall in the 1998 draft to his charity work, to his countless game winning shots and of course the hoisting of his Finals MVP award and the Larry O'Brien trophy through the streets of Boston during their championship parade. That was the loudest the Garden had gotten to say the least, ending with "Thank You Paul" on the video screen. 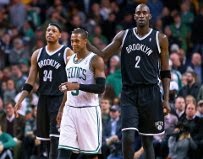 The camera panned to Pierce, showing him repeatedly mouthing the words "thank you" and "I'll love you forever" as he took a bow, the "Paul Pierce" chants only got louder and louder even after the second quarter started.

"I mean uh, it was tough. It was tough for me to swallow," said the former Celtics captain. "I was probably about five seconds away from shedding a tear. I admit to it. There's no words that can really describe just the shower of love here...Just all the moments, that's all you could think of. That's pretty much what the video showed, the difference I was able to make not only on the court but in the community."

Celtics' coach Brad Stevens quickly gave his players instructions during the two breaks and let them watch the tributes.

"It was the right thing to do," he said. "Not much in my life is bigger than the next possession, but that is."

Both video tributes ended with shots of the rafters where such great players from Celtics history have their numbers hanging including legends Larry Bird, Robert Parish, and Kevin McHale. Two spots remain open on the banner of retired numbers. Most believe it is a no brainer that the #34 & 5 one day should be the next two numbers to be retired and raised in their honor.

The Celtics meanwhile had lost for the 17th time in 20 games. Brandon Bass who returned to the starting lineup led the way with 17 points, and Rondo had his best game since coming back from ACL surgery, flirted with a triple double when he scored 13 points, grabbed eight rebounds and handed out eight assists. Gerald Wallace started for the third straight game, added 12 points and five assists.

Andray Blache scored 17 points, Alan Henderson and Andrei Kirilenko each had 11 for Brooklyn who are now 2-0 vs Boston so far this season.

Kevin Garnett finished with 6 points, 3 rebounds and 3 assists. Both teams struggled from the field as neither side reach 40 percent shooting from the field. With a 10-2 run for the C's to open the quarter, they seemed to be aggressive early and took advantage of the emotional state of the two former Celtics.

By halftime it was not so impressive 35-34 as the Nets were up one. By the end of the third, it was an actual basketball game and the Celtics were trailing 59-53.The Nets were up by as much as 12 halfway through the fourth, but Boston cut the lead to 73-70 on a 3 ball by Chris Johnson.

After a Kirilenko layup and a free throw by Deron Williams on a questionable foul called on Jeff Green, Pierce hit a jumper from his all too familiar sweet spot. With the score 80-72, Boston didn't go away as they cut the deficit to three on a Bass field goal and a Rondo 3-pointer. Joe Johnson missed a jumper and Rondo grabbed the board giving the Celtics a chance to tie the game with another three. At the top of the key, the captain lost the ball to none other than his friend KG, who finished on the other side. It was a story book ending for the 2008 defensive player of the year, a vintage play we've seen all so many times.

He's done it all year for us defensively," said Nets coach Jason Kidd. "He's always at the right place at the right time."

It was tough night for both clubs as it was not easy to focus on the game at hand given the circumstances. It was only the Celtics' fifth nationally televised game (1-4 record for the year) so far this season. They have gone winless in all reunion match ups.

The home crowd cheered each time either Pierce or Garnett touched the ball, passed it or every time they checked in or out of the game. They seemed ready to erupt on every shot attempt made by the two. It was truly a great return for the New England icons.

Not even their former coach could prepare them for what to expect once they entered the Garden,"I actually talked to both of them that morning," said Doc Rivers. "It was funny. I've been around those guys for so many years, and they were never nervous before a game, yet they were extremely nervous. Actually, I'm not sure if it was nervous, but they just knew that they were not going to be able to focus."

After the game the media's focused on the two former Celtics' reaction and thoughts on the whole night, while trying to win a basketball game.

You have to ask yourself, did you truly appreciate the time they both spent in a Celtics uniform or did you take it for granted? The way I see it you will never see two players like Kevin Garnett or Paul Pierce ever again. They are one of a kind athletes and one of a kind people. With the new generation strongly upon us, we can't forget those who made it possible for us to believe in something pure.

For 15 years and especially the last six, it was an era that can never be forgotten. 'The Truth' is we all felt the bond, even if we didn't know them personally. It was a great night for everyone involved.

"It was a just a special thing for me. Through my down times, through my immature times, through my growing up and becoming a man in this city to winning a championship-and everybody sticking with me, staying behind me-I'd just like to tell them, 'Thank You' " - Paul Pierce

There is no way we could ever repay you two.