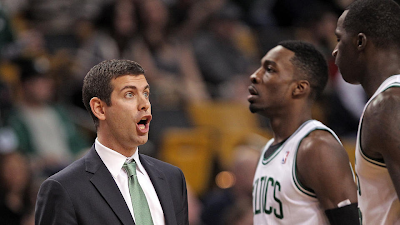 Late in the third quarter of Tuesday's game against the Hawks, Celtics forwards Brandon Bass and Jeff Green exchanged heated words on the bench, where they watched the final 18 minutes of the game after Coach Stevens benched both of his starters in a one-point loss at TD Garden.

Stevens denied that the altercation between Bass and Green had anything to do with their 18-minute benching.

Stevens said that he wanted to stick with the lineup on the floor because they were playing well and wanted them to finish the game.


"Disagreements are part of the game, it's part of team basketball, but how quickly you move on from there says a lot," said Stevens.

The argument escalated at the end of the bench until Celtics teammates and assistant coach Jay Larranaga interferred, and ended the spat between Bass and Green.

After the game, Green wasn't specific about what was said in the exchange but said that it was no big deal.


"It was just a miscommunication, that's all. We both wanted to win, we just get frustrated with the process. That's all it was. It wasn't nothing big," Green said. "We're trying to figure out a way to win. Like any team, you're going to bump heads. Because somebody might see it one way, somebody might see it another."

Bass echoed Green's words when asked about the situation.


"It wasn't a big deal. (It was a) smaller thing. It happens," said Bass. "It happens all the time, with anybody. When you want to win that bad, things happen. But it wasn't a big thing. It was something small that was easy to correct."

The second unit's offense was lead by Kelly Olynyk and Kris Humphries. Olynyk scored 21 points and Humphries scored 18, season highs for both players. Stevens stuck with the two big men in the frontcourt along with Gerald Wallace while Bass and Green stayed on the bench.

Celtics blew an 18-point lead and could have used a little help from their scoring leader, Jeff Green in the final quarter. Stevens can downplay the incident as much as he wants but he's not fooling anyone by saying the altercation between his two starters had nothing to do with them missing the entire fourth quarter. Although the starting unit shot poorly (18%), this is the first time Stevens has benched Green for the last 18 minutes of a game.

If Stevens is willing to sacrifice a win in order to send a message to his players, then maybe this isn't the first time these two have gotten into it. Or maybe he wanted teach them a lesson. Or, maybe he wants Humphries to actually earn his $12 million salary. Who knows.