Thoughts on a special night at The Garden

We are hours away from the emotional return of Paul Pierce and Kevin Garnett at the TD Garden, you might be asking yourself what are the former Celtics’ legends feeling about the big night?

Brooklyn winners of their last 9 of 10 are clicking at the right time, while Boston even with its newest captain Rajon Rondo back as of a week ago, have lost 13 of their last 15 outings.


All focus will be to win this game regardless if anyone is ready or not to deal with all the extra stuff the media has put into today’s tip-off.

“I just know that the emotions will probably be high, just because of the success that we had while we were in Boston,” Garnett told reporters after the Nets beat the Mavs last night. “We had some really good years there, some really promising years. I think it’s going to be forever, we’re embedded in it.” [ESPN Boston]

It’s impossible to believe that the return of The Truth or KG won’t over shadow the game itself. Pierce knows after 15 years with the Celtics it’s going to be fun to see familiar faces, even after he decided to skip a preseason game here back in October to make tonight his one and only return to Beantown this season. 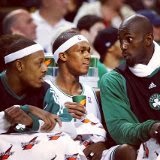 Various Celtics players are downplaying the pending return of the two icons. “It’s another game. We need to win,” said Rondo. [ESPN Boston]

Another former Celtic, Kendrick Perkins had his emotional return two years ago, when he came back to a warm reception and a touching video tribute that concluded with the words “Thank You Perk!” He walked on the court with both arms raised above his head, expressing his gratitude to the home crowd that grew to love him after eight years in green.

He was asked about it and how he felt on his return, Friday night after beating the Celtics 101-83.

“It was great, he recalled. “I thought the fans, organization, I thought everybody showed me love and appreciation. It was great. It gave me chills. It’s hard to play through that after you get a ceremony like that, but it was good.” [Masslive.com]

Perk will be in attendance, since it's his off day to take it all in. He believes his former teammates now in Brooklyn will feel the same way, once they step back into the TD Garden in less than 10 hours.

“Emotional,” Perk predicts. “Wouldn’t be surprised if they both shed a tear. They both did a lot of things here, especially Paul. I’ll be watching.” [MassLive.com]

Joel Anthony now with the Celtics went through three straight playoffs series against Pierce, KG and Boston from 2010-2012 as a member of the Heat. He knows all too well what playing against them has meant over the years.

“More than anything, you just wanted to beat them,” said the Celtics newest center. “You respected who they were, what type of team they were and how good of a team they were…To be able to have battles with that team was special.” [WEEI.com]

When the two-future hall of famers step foot on the parquet floor at the Garden in Nets uniforms, Pierce will be glad he gets to make his journey back for the first time since April of last year with Garnett by his side.

“We shared so many memories, on and off the court…shared our best memories in Boston, said the second all-time leading scorer in Celtics' history. “We won a championship and, when you talk about the ride that we had together and the run, a lot of things go through your head, so it’s fun to be able to share it with him.”[ESPN Boston]

KG knows what will be involved on Sunday and despite the nostalgia of it all, he believes there is still a game to be won.

“It’ll be good to be back in Boston,” Garnett says. “It will be what it is, man. I’m going to embrace it for whatever it is and I’m sure the emotions are going to be very high. And I will act accordingly. But we are there to win a game. It will be good to see Rondo and some other personal friends. Other than that, it’s another game that I have to be prepared for.” [ESPN Boston]

For those that are going to be a part of tonight’s crowd at the Garden, remember what these two meant to the franchise, the city of Boston and New England. The memories and the history itself is worth the price of admission, not to mention countless standing ovations. I know I’ll be in attendance, so tune in to not only welcome back some hometown heroes, but to recognize an era that will always be special.

“Some things are forever, man, “added KG. “I’m happy to say that I’m part of that era.” [ESPN Boston]

So are we. Welcome home boys.