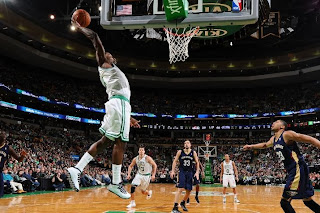 Boston - The Celtics have started 2014 the same way they ended 2013; with another loss. Last night at TD Garden, Celtics loss its first game of the New Year in a close one to the Pelicans, 95-92. Despite losing one of their key players off the bench in Ryan Anderson early in the fourth quarter, New Orleans found a way to pull out the win.

Anderson had 13 points and seven rebounds before being taken out on a stretcher after colliding with Gerald Wallace.

Both players hit the floor hard. The diagnosis for the Pelicans forward was a ‘cervical stinger’ after he was on his back for five minutes. Players from both teams surrounded Anderson while the Celtics trainer and team doctors worked on him. Further evaluation was needed at a local hospital. Wallace got up almost right away, he stood about 20-feet from Anderson, biting a towel while Anderson was being looked at.

“I didn’t even see him,” said the Celtics forward. “We collided. I didn’t even know he was there. He said he was alright.”

Monty Williams kept it short when asked about Anderson, stating he could not disclose much.

“We are just praying for his health," said the Pelicans coach. “He looked like he was OK. I was more worried about his mother. I know she’s at home, a nervous wreck, so hopefully she hears this message and is cool with the fact that he’s OK and in good hands.”

Meanwhile, his team in the middle of a four-game east coast trip, rallied to win their fourth game in six tries. Anthony Davis, who is having an all-star type season, chipped in 23 points and grabbed nine boards. Tyreke Evans scored 16 points off the bench, and had a key layup late in the fourth that helped propel his team to victory. 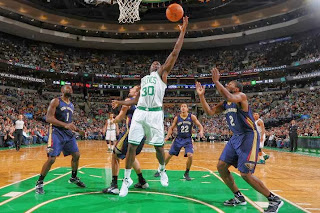 “I thought we had really good looks for the most part, I really did,” said Brad Stevens. “I thought we were much more aggressive and for whatever reason, we didn't make shots.”

New Orleans, while hanging on to a 91-90 lead, Evans scored a driving basket to give New Orleans a three-point lead. Green hit two free throws shortly after for Boston with 35.2 seconds left and cut the lead back to one. The Celtics had a chance to grab the lead after Evans lost the ball out of bounds. But after Bradley drove down the middle, he missed a contested layup and during a scramble, Anthony Davis came up with the rebound. 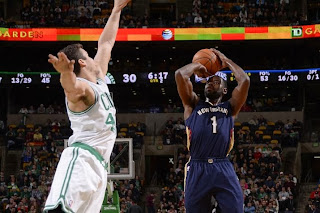 Following a timeout, Brian Roberts was fouled immediately and hit two free throws with seven seconds remaining to make it 95-92. Sullinger’s 3-point attempt hit the bottom of the backboard and Davis grabbed the rebound just before the final buzzer sounded.

Boston seemed like they had control being up 86-83 after a Jeff Green 3-pointer with just under 5-minutes left in the game, but Jordan Crawford was having a poor shooting night, missing 12 of his initial 13 shots (2-for-14 overall) and the bench was out scored 52-20 including 12 points from our old friend; Pelican center Greg Stiemsma. The home team is currently on a three game losing streak and have lost six of their last seven overall.

The Celtics will have another opportunity to get their first win in 2014 when they travel to Oklahoma City to take on the 25-7 Thunder. It will be the first of a five game west coast swing, tip-off is at 7 PM.

Game Notes:
The Celtics are now 13-20 and are four games behind the Raptors for first in the Atlantic Division. Sullinger has been bothered by a bruised right hand, and it might be beginning to alter his shooting. He went 3-for-17 last night. Boston will begin its west coast road trip on Sunday; they will be playing five games in seven days (Oklahoma City, Denver, Los Angeles Clippers, Golden State, Portland).