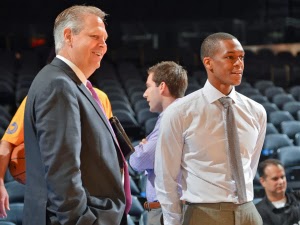 Celtics president of basketball operations Danny Ainge said Rondo has talked to him about extending his contract but doesn't expect a signed deal with Rondo until next season or later.

"We did talk to Rondo about extending him," Ainge said Thursday on 98.5 The Sports Hub. "But that's all part of negotiating that will happen again this summer and most likely the summer after."


Due to the nature of the collective bargaining agreement, Celtics will most likely not extend Rondo's contract in the near future. But Ainge says he's definitely interested in inking Rondo to a new deal.

"In the collective bargaining agreement, there are limits on what can and can't be done," Ainge said. Thursday on 98.5 The Sports Hub. "Really, it's not that Rondo doesn't want to accept an extension, as much as it's just not financially smart for him to accept it right now. We didn't think he would [sign] but we did try"


Ainge continues to show signs that point to Rondo being a center piece of the franchise's future. Rondo was named captain just a week ago in his 2013-14 season debut and has had conversations with Ainge about staying in Boston for more than just a couple of seasons.

Rondo's current contract ends after the end of the 2014-15 season.