Celtics 89- Wizards 86: Celtics get their first win of season 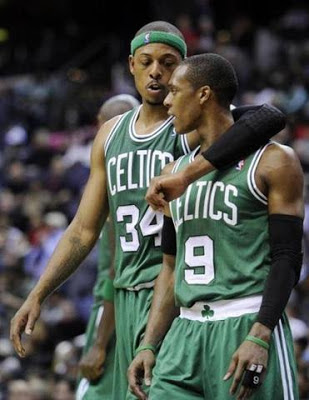 It wasn't pretty, but the Celtics were able to fend off the Wizards late in the fourth quarter to capture their first win of the season, Saturday night in Washington. After two losses, and on the second night of a back-to-back, the Celtics blew an early 15 point lead but were better in the end.

After two losses, the Celtics were desperate for a win. It turned out to be harder than expected, even against a Wizards team missing its two best players, John Wall and Nene.

After letting the Wizards come back to take their first lead of the game with only three minutes left to go, Pierce hit a 3-pointer with 2:35 left. The Wizards never scored another basket. On their last six possessions, the Wizards missed four shots and turned the ball over twice late in the fourth.

Rondo finished the game with 12 points and 12 assists, and Pierce finished with a game-high 27 points and seven rebounds.


"We got the win, and that's the most important part at the end of the day." said Pierce. "Obviously we've got to play better, but it's good to finally get that win under our belt and just try to build on it."

Celtics came out with a purpose Saturday night. Although they weren't looking as intimidating as we thought they would look, it's going to take some time. It's clear that the talent is there, it's the chemistry that will eventually take its place. Hopefully sooner than later.

Celtics will take on this same Wizards team Wednesday night in Boston.

Jared Sullinger got his first career start against the Wizards and finished the game with four points and seven rebounds. I thought this was a great game for him to get the start because of uptempo type of play and because a guy by the name of Trevor Booker would be guarding him... The Wizards were the ideal opponent for Jeff Green as well. They really don't have a lock down defender for him (other than the mediocre Trevor Ariza) and Green flourishes in a run-and-gun type of game. It was also a homecoming for Green, the Maryland native returned to the arena where he played college games for Georgetown. He finished the game with 11 points. He got great looks offensively, I expect him to have an even better game against the Wizards Wednesday night in Boston.

Josue Pavon
Posted by Josue Pavon at 11:52 AM
Email ThisBlogThis!Share to TwitterShare to FacebookShare to Pinterest