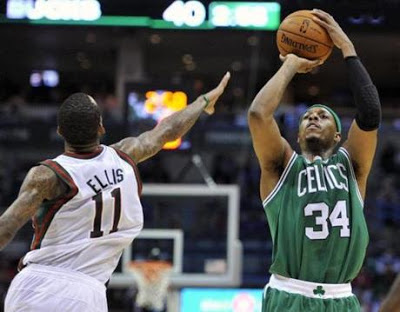 It has been a discouraging start to this young season for the Celtics, to say the least. Boston came into last nights game against the Bucks 0-3 against NBA teams not names the Washington Wizards. So to say they needed a statement win and looked to their captain to right the ship. Paul Pierce responded and led the Celtics to a 96 - 92 win in Milwaukee last night against the Bucks.

Pierce led the way with 25 points, which included a stretch mid way through the fourth quarter where it was vintage  Paul Pierce. He knocked down jumpers, threes, and drove strong to the hole, while going basket for basket with the Bucks Monta Ellis. He scored on three straight possessions for the Celtics where you just knew he was taking the shot. It couldn't have come at a better time with the Bucks charging back on the back of Ellis, who finished the night with 32 points.

This was certainly the most complete win of the year for the Celtics and hopefully they will be able to build on this win. Here's what you can take away from this win vs. the Bucks.

Jeff Green continues to be an enigma.
Jeff Green finally showed a glimpse of what he can be for this team. He undoubtedly had his best game so far this season, finishing with 12 points off the bench. It wasn't just Green's scoring that was big for the Celtics last night. He was hustling to every loose ball, playing superb defense, and just playing with an energy level that was absent in the first five games.

If Green can build off this positive performance, everything should start coming together for the former Georgetown standout. Not only will it effect his confidence level, but also Doc's. This may sway Rivers to give Green more minutes, specifically with the starting unit where I do believe he will strive. 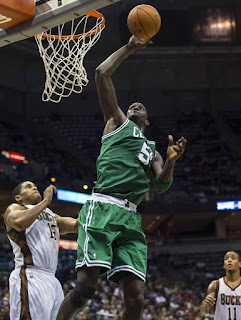 So much for struggling in back to backs. The Celtics looked to their veterans to carry them last night, and they showed no signs of fatigue. Pierce and Garnett again were the top two scorers for the Celtics.

The elder statesmen in green looked like have started the season with a pep in their step. Pierce, 25 points, and Garnett, 18 points, have not showed any signs of slowing down this season, as many critics have predicted. This is great news for Doc, Danny, and the Celtics. Health and minute management will be something to watch for these two as the season long grind gets going for the respective 35 and 36 year olds, and see how it will impact the Celtics.

Finally the Celtics got back to playing defense, something they didn't do at all in the first 5 games of the season. They started the game struggling to contain the Bucks, but were stout when it mattered. In the second half they were much more energetic on the defensive end. They were suffocating in the fourth quarter, holding the Bucks to 37% shooting when it mattered the most. 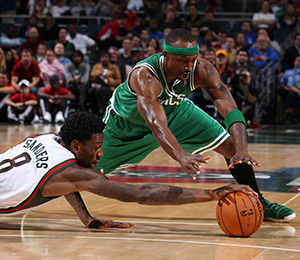 They still have some issues to work on especially against the pick and roll but again, this was a performance they Celtics can build off of.

Stats of the night:

1. Rondo had 10 assists, which now puts him ahead of John Stockton for third place with 30 consecutive nights with 10 or more assists.

2. More of a disturbing stat for the Celtics. They allowed 48 points in the paint to the Bucks, who have no real big man. They have to get better at keeping opponents guards from getting to the basket so easily. If not, this will be an alarming trend for the Celtics that you should keep an eye on.

3. Old friend Marquis Daniels, got a lot of play last night. Looks like he is thriving in his new role with the Bucks and scored 12 points against his former squad.

4. Jason Terry got the start last night and produced. He played 22 minutes and poured in 15 points including 2-3 from behind the arc. Great sign for the veteran, who looked very comfortable in the starting lineup.

Posted by SeanDutra at 9:50 AM
Email ThisBlogThis!Share to TwitterShare to FacebookShare to Pinterest