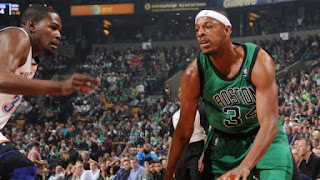 Paul Pierce scored 22 of his 27 points in the second half to lead the Celtics to a 108-100 victory Friday night at the Garden.

The Celtics snapped a two game losing streak by beating Oklahoma City and got an early lift from the bench, a lift that would carry on throughout the game. Jeff Green led the way for the reserves, he scored 17 points and got help from Sullinger, who scored eight and grabbed four rebounds.

"It's big for us," said Pierce. "This is a gut-check type of a win, a 'look yourself in the mirror' type game... I know we're capable of playing against quality opponents.''

Celtics extended a halftime three point lead to a 14-point fourth quarter lead due to a big third quarter. Pierce scored ten and Green scored 9 in the third. Although the C's had a big lead in the fourth, the Thunder managed to cut the lead to three by the end of the fourth. 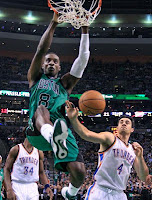 Kevin Durant, who finished the game with 29 points for Oklahoma, missed a cruicial three pointer with under two minutes to go that would have tied the game.

Russell Westbrook finished the game with 26 points, eight assists, and seven rebounds for the Thunder, who lost for just the second time in their last 10 games.


"It's great to beat Oklahoma," said Coach Rivers. "They were in the finals last year, and they're the team to beat, I guess, in the West. But it was more how we played. We played with great force tonight."

From tip-off to the final buzzer, the C's were locked in. The transition defense is what was most impressive. Players were getting back on time and making their opponents really work for a shot. Celtics will head to Orlando today and play the Magic tomorrow night at 5:30. Former Celtic Glen "Big Baby" Davis has been playing very well this season, and will look to knock off his former team at the Amway Center.

Notes:
I loved the sense of urgency from the C's on both ends of the floor last night. Offensively, players were very active and without the ball and weren't settling for jumpers. One thing that has become a concern for me is Brandon Bass' jumper. The 17 footer that was automatic last season isn't going down with consistency. Don't get me wrong, it's not a huge problem but it's something that makes the Celtics a tougher team when he has that shot going. It's still early, but it would be nice to see him get going.

Posted by Josue Pavon at 8:59 PM
Email ThisBlogThis!Share to TwitterShare to FacebookShare to Pinterest