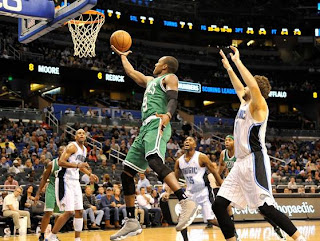 The Celtics held off the Magic Sunday night in a game with two very different halves. After securing a ten-point lead going into the locker room, the Celtics were met with a Magic backcourt that found their stroke from behind the arc.

With the help of some costly turnovers and miscues by the Magic, the veteran-led Celtics ground out their second straight win and six consecutive against Orlando.

Paul Pierce ended the game with 23 points and atoned for missing a game winning shot in regulation by nailing a top of the key three-pointer to seal the overtime victory, 116-110. The Celtics did not play their strongest defensive game but with this type of victory, confidence is definitely growing.


"That's what it's all about," he [Pierce] said. "Finding a way to win. Not feeling sorry for ourselves late about giving up a pretty good lead. And just finding a way to grind it out. And that's what we did."

Leading the green shirts with 24 points and ten boards, Kevin Garnett provided the much needed spark to take the lead back in the fourth, scoring 8 points all off of Rajon Rondo assists in the final five minutes of regulation after the Celtics had fallen behind 97-91.

Rondo ended the night one rebound shy of a triple-double, scoring 15 points and added 16 helpers which was good enough to see him tied with John Stockton with 37 games in a row with 10 or more assists.

J.J. Reddick and Jamer Nelson scored 21 and 20 respectively off of a combined 6-14 shooting from three land. Nelson scored 17 of those points in the second half and overtime period only to watch his last ditch three miss as the Celtics sealed the victory with Kevin Garnett connecting on one of his two foul shots after Nelson fouled to stop the clock.


"We had our chances. We definitely had our chances in overtime," Reddick said. "We had a couple of bad possessions offensively. We'll learn from that... You can talk about experience or execution. They just executed better than us in the end" 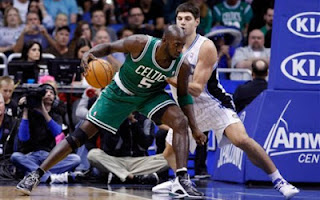 Nelson's burst of offensive production was not without circumstance as he took advantage of Leandro Barbosa who came in after Rondo got his fourth foul. Although outmatched defensively, Barbosa once again provided some much needed offense off the bench, scoring 11 points in his first three minutes of play. Other bench players were not so productive, as Jeff Green missed all seven of his shots in his 20 minutes of play after dropping 17 on the Thunder in the previous game. Former Celtics Glen "Big Baby" Davis finished with 15 points and 7 boards.

Though they still have several kinks to work out on the defensive end during their days off from game action, Garnett says he likes where his team is right now.


"We're a defensive team that can score the basketball," Garnett said. "We always have been. As long as Doc's going to be here, that's how it's going to be"

The Celtics return home on Wednesday for a pair of home games, beginning with Brooklyn.


Notes: After providing some cardiac activity with their defensive struggles, it's these types of grind-it-out, find-a-way wins that the Celtics will look back on later in the season when a must-win is on the line. The confidence is building in the Garden and any game within reach if Doc Rivers is calling the shots. Let's hope they can avenge a terrible loss Wednesday night and prove they can play big when needed.


-Sean Heenehan
Posted by SeanDutra at 11:17 AM
Email ThisBlogThis!Share to TwitterShare to FacebookShare to Pinterest