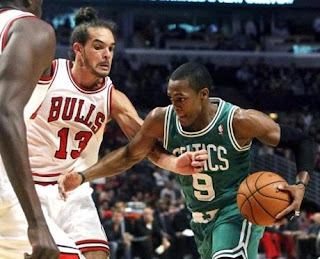 Rondo led the Celtics to victory, while extending his streak and inching one step closer to NBA history.


Rondo ended the game one rebound short of triple double last night at the United Center. He had 20 points, 10 assists and continued his streak of consecutive games with 10 or more assists to 31, the longest in the NBA since John Stockton's 37 consecutive games in 1989.

"[Rondo] has an excellent game," said coach Rivers. "He is starting to get comfortable with the players that are out there on the floor and what he can call with them in there."

All five Celtics starters finished in double figures for Boston. Bass finished with 16, Garnett had 15, Terry tallied 13 and Pierce ended the game with 10. This is the second consecutive win for Boston with Terry in the starting lineup and Boston got things going early in the game. They scored 33 points in the first quarter and had 58 by halftime.


"We played well offensively," Rondo said. "Besides the turnovers I had, we took pretty good care of the ball. We got out on the break, kept it simple offensively." 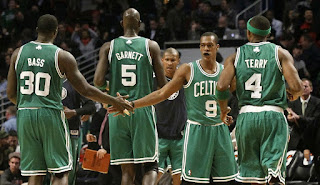 Although the Celtics were cold in the fourth quarter, they buckled down late in the game and got key stops against the Bulls, after Chicago went on a 10-0 run. Celtics went scoreless for five minutes before Jason Terry knocked down a jumper that ended the drought.


Luol Deng killed the C's offensively, especially late in the fourth. He finished the game with 26 points and 11 rebounds. The Bulls were within three points with under a minute to go. But a Rondo to Garnett alley-oop sealed the game, and fittingly gave Rondo his tenth assist to keep his streak going.

"They did make a good run at us," said Pierce. "We just have to run to the finish line in games. There were a few times when I thought we were up 12 to 14 and could of gone to 20 and didn't"

Celtics play again tomorrow night when they host Al Jefferson and the Utah Jazz at the Garden.


The Celtics became the first team to score 100 points against the Bulls in 16 games. Chicago, known for their tough defense, gave up a lot of points against the Celtics. The starting lineup of Rondo, Terry, Pierce, Bass and KG is the best offensive lineup for Boston. I wouldn't be surprised if Doc decides to stick with it for now... I was happy to see that Rondo's streak didn't get in the way of his scoring last night. I've been wanting Rondo to be more aggressive offensively, and he did just that last night while still keeping his streak alive. Tomorrow night the Celtics start a rough stretch of four games in five nights, so they'll need more of that. Pierce is going to have nights like this every now and then throughout the season.


Josue Pavon
Posted by Josue Pavon at 4:10 PM
Email ThisBlogThis!Share to TwitterShare to FacebookShare to Pinterest