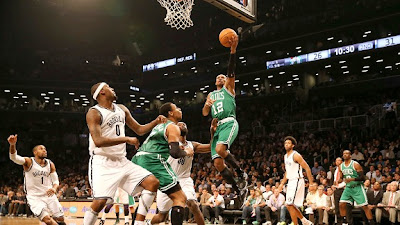 Paul Pierce led the Celtics with 22 points last night, while Rajon Rondo sat out due to a sprained left ankle, and Boston had its three game winning streak snapped.

After being down by as many as 13, Boston's rally came up short as they couldn't close the door on the Nets Thursday night in Brooklyn. Deron Williams and Joe Johnson hit big shots down the stretch as the home crowd celebrated a 102-97 win at the Barclays Center.

Leandro Barbosa started in place of the all-star point guard (Rondo), who suffered his injury in the third quarter of Wednesday night's game against Utah. The Brazilian Blur held his own the best way he knew how, as he attacked the basket and finished with 16 points and two assists. Kevin Garnett added 14 points and seven boards, while Courtney Lee chipped in with 13 and nine off the bench.

The C's trailed 59-51 at the half as the Nets quickly jumped to an 11 point lead in the first quarter. Brooklyn lead the entire first half and they grabbed 15 offensive boards to score 19 second chance points heading into the intermission.


"I was disappointed with our efforts in the first half. I thought they just kicked our butts," said Rivers. "I thought they were more physical, went over our backs, and pushed us around."

In the third quarter, Boston used a 20-2 run to make it back as they led 79-74 going into the fourth. Jerry Stackhouse's only three pointer of the game evened it at 85 with 6:21 remaining. Johnson, who finished with 19 points, made consecutive jumpers and Brook Lopez (24 points) hit a put back to extend their lead to six, as the Celtics were left playing catch up once again.

After a clutch Jeff Green three-pointer, Boston was trailing by three as they had the ball coming out of the timeout. Pierce was fouled on a lay-up attempt that he nearly knocked in for an and-1, with 34.5 seconds left in the game that would of cut the lead to one. Pierce, an 84 percent free throw shooter missed both attempts and due to a missed communication by Doc, who told the team not to foul, Paul committed his fifth foul on Deron Williams in order to stop the play. 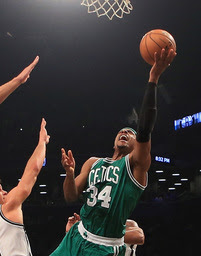 Williams, who finished with 24 points was perfect from the charity stripe and pushed the lead to five. After Pierce drained a quick three to cut it to two, the C's were out of timeouts and the game became a free-throw shooting contest the rest of the way. Jason Terry, who finished with 10 points and six assists missed two key free throws to cut it to one as the Celtics missed their opportunities at the line at the worst possible time to avoid the Nets from winning their fourth straight.


"I think I was thinking about the layup too much, a little disappointed. It was unlike me to miss two free throws," said Pierce. "So I take a lot of the blame for down the stretch, I'm the guy they call upon to make the plays and I didn't make the plays tonight. It's a long season, but that's the reason we lost tonight. You can point to a number of little things we talk about all season long."

Even though Boston held Brooklyn's shooting to just 42 percent, second chance points hurt the C's as they lost the battle on the offensive glass 18-12. Chris Wilcox yet again provided a spark in his 12 minutes of play, putting up 6 points, three rebounds and two blocks while Brandon Bass couldn't find his shooting range and went four for 14 for just eight points. The Celts play again tomorrow afternoon versus the Raptors, tipping off at 12:30 at The Garden.


Quick Note:
This marks only the third win for the Nets over the Celtics in 21 tries, and it was the first time the Nets were televised on TNT in over four years. Marv Albert, who is from Brooklyn and worked games for the Dodgers when he was young before calling games for the Knicks and the Nets, was the lead announcer last night.


Joel Pavon
Posted by Josue Pavon at 2:48 PM
Email ThisBlogThis!Share to TwitterShare to FacebookShare to Pinterest