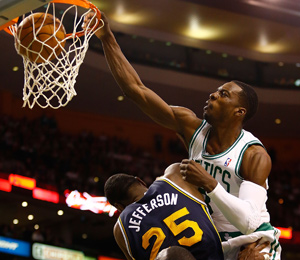 It was a night where everything clicked for the Boston Celtics. They were able to limit the minutes of there veteran stars, got a big contribution from there bench, and looked solid defensively in a 98-93 win over the Jazz last night.

The Celtics got excellent performances from Leandro Barbosa and Jeff Green who both had 16 points a piece. Barbosa, who played major minutes after Rondo tweaked his ankle, was virtually unstoppable, he was able to get to the rim at ease, and seemed like veteran in Docs system the way he was running the offense.

Green was everything Celtics fans were expecting him to be entering the season. One play in particular could be a turning point for Jeff Green to get his season started. Green took a kick out pass from Garnett, blew by his defender and emphatically slammed it home, right on Big Al Jefferson.

Celtics have now won 5 of six after dropping their first two games of the year. Here's a few points from last night. 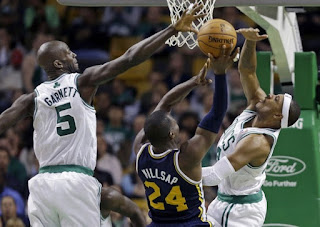 Rondo rolled his his ankle mid way through the third quarter and immediately made his way to the locker room, with long time trainer Eddie Lacerte. Reports were that he was cleared to come back in the 4th quarter, but he did not see any action.

Even thought he played only 2 1/2 quarters Rondo dished out 10 assists, again. This pushes his streak to 32.

The ankle injury does not seem like it will force Rondo to miss any time but with the Celtics playing the  next 3 games in 4 nights, its something to monitor.

Garnett played 30 minutes last night, but 12 of those were in the fourth quarter.  So yes, Garnett did play the entire 4th quarter, but he was playing fresh as he only played 18 throughout the first three. The Celtics needed Garnett on the floor in the fourth as the game came down to a final possession.

This was a great sign for the Celtics as they have looked absolutely awful this year when Garnett was on the bench. Chris Wilcox, Jared Sullinger, and Brandon Bass really played well last night and allowed Doc to limit 'The Big Tickets' minutes.

Stats  of the Night
1. Rondo kept his streak alive, 10 assists in only 25 minutes. That is 32 straight games with 10 or more assists. 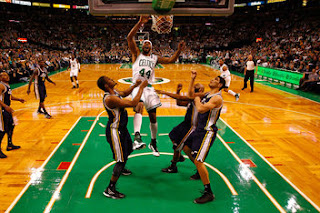 2. This may not be the most eye popping stat line here but Chris Wilcox had a major impact on this game again. Wilcox played 18 minutes, was 3-3 from the floor scoring 7 points and grabbing 5 boards.

His biggest contribution wasn't in the box score, he was able to defend the paint respectfully while Garnett was on the bench.

3. After the Celtics defense looked more like a Mike D'Antoni coached team through the first 4  games of the year, they have turned it around
drastically.

Since the loss against the 76er's,the Celtics have allowed opponents to shoot only 41 % and held each team under 95 points.  This is exactly the kind of defense that the Celtics will lean on throughout the season.

Posted by SeanDutra at 8:18 AM
Email ThisBlogThis!Share to TwitterShare to FacebookShare to Pinterest