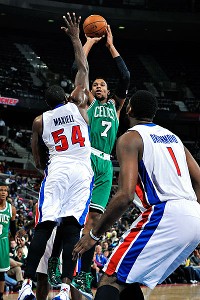 Jared Sullinger led the way with his 16 points as the Celtics played their fourth game in five nights in Detroit on Sunday, and were blown out by the home team.

After blowing leads to Phoenix, OKC and Orlando, the Pistons (2-9) were finally able to win at home as they pulled away to beat Boston 103-83. Greg Monroe led all scores with 20 points and grabbed 13 rebounds while Jason Maxiell added 15 points for the win. Detroit had six players in double figures and shot 54.5 percent for the night.

Not much went well for Doc and company after the first quarter when they dominated early, but you could see the effects of the schedule had a clear impact in the second period. Boston missed 12 of its first 16 shots and only a series of turnovers by the Pistons kept the C's hanging around as they were only down 48-43 at the half.


"We can't use the schedule as an excuse- this is the NBA and you have stretches like this," said Garnett, who chipped in 15 points in 20 minutes. "But when you see as many shots hit the front of the rim as we had tonight, you know that you don't have your legs. You just have to fight through it, and we didn't do that tonight." 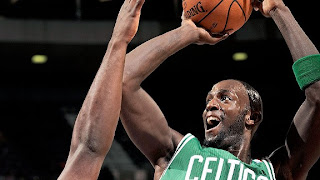 It only got worst. Boston felt the pressure of coach Lawrence Frank's defense, which forced seven turnovers and the C's only shot 31.3 percent and Detroit outscored them 23-14 in the third. It was pretty much a wrap when Doc decided to go small in order to help Rondo keep the streak alive.


"Why not?" Doc asked. "The press keeps talking about it, so I figured I would give him a shot at it. The funny thing was that the harder we tried, the worse we got at it."

Sullinger finally made the efforts pay off, hitting a jumper with 51 seconds left in the game to give Rondo his tenth assist. Rondo has now extended his streak to 34 games with 10 or more assists for the third best record in league history, trailing only John Stockton who had 37 in 1989, and of course Magic Johnson with a 46-game streak in the 1983-1984 season.

Boston once again could not come up with a win on back-to-back games, falling to 6-5 on the young season. One bright spot to consider was the efforts and the continued great play of Jared Sullinger, which is nothing to ignore. Sullinger is slowly coming into his own, picking his spots, and learning how to play with Rondo. After the double-double he had against the Raptors, he picked up right where he left off from Saturday afternoon.

The Celtics will have a few days to rest up as they prepare to host the San Antonio Spurs on Thanksgiving Eve. Tip-off at 7:30.


Joel Pavón
Posted by Josue Pavon at 3:46 PM
Email ThisBlogThis!Share to TwitterShare to FacebookShare to Pinterest