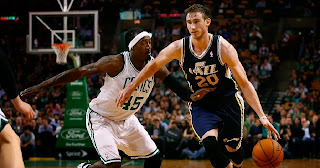 Five games into the young season and I think I might be speaking for most when I ask, who are these young Celtics?

Their identity is not that cut and dry. For starters a 2-6 preseason may have or not have been a reflection of who they really are (I mean, it's only preseason, right?). Then again, a current 1-4 record doesn't help much either.

In a city where the Red Sox just won the World Series, and the Patriots are 7-2 atop of the AFC East, the Celtics are without its floor leader Rajon Rondo and just snapped a four game losing streak.

All four losses were winnable. But maybe this team just needs to elect a different leader until Rondo comes back. If you were the coach of this team, who would you elect?

We all remember how unhappy he was with his teammates early on in the preseason, mostly because of the poor play in the first few games. Some believed he was unhappy to be here (Remember the day the ex-Nets were introduced as Celtics?) and that he was seeking a buyout. It was evident he was on board to come here and play hard; he showed that in the preseason.

Coming off a no-so-great season in Brooklyn, Wallace proved he could rebound and play great defense. Coach Stevens was trying out different lineups and it lead me to think - maybe Wallace will not be a starter this year. He's played well with the second unit especially with Sullinger and Olynyk.

It wasn't a big surprise when Coach Stevens took Wallace out of the starting lineup Wednesday night before the Celtics home game versus Utah. Wallace started all four games for Boston but before Wednesday's game, Stevens decided to shake things up. This was only the 10th time Wallace has been asked to come off the bench in the last four years, he didn't sound too happy and had this to say to reporters:


"I'm trying to make sense of everything," said Wallace prior to the game. "I'm trying to figure out what's really going on and go from here. I don't have a clue. I don't know what's going on. My thing is when I'm on the court, I compete to win. And when I'm not, it's just cheer my guys on and hopefully we'll get a win." 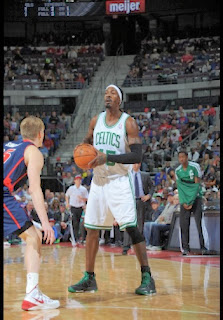 After being in the league for 13 years, Wallace, 31, has only been to the second round of the playoffs once (10 years ago with Sacramento). This is his third team in less than two years, fifth overall. He is not getting any younger, he wants to win, and doesn't want to be a part of a 'rebuilding' team at this stage of his career.


"I'm done talking," Wallace said before Wednesday's game. "Whatever they say, it's their team. They can do whatever they want to do. [I'm just] going to come out and compete hard to try and win."

According to his teammates, Wallace has been great since arriving to Boston. He's been vocal in the locker room and in practice.

After coming off the bench last night and almost putting up a double-double (nine points, nine rebounds) in 23 minutes; Celtics won its first game.


"True professional," Jeff Green said of Wallace. "Still came to work. The minutes he played we big. The defense he games us, the energy he had, he was the reason we got the lead. For him to be told probably [Wednesday] morning that he wasn't going to start, then come out and play the way he did, that's a true professional. We've got to feed off what he does because he's one of our leaders and he shows a lot of heart when he's playing"

This is a process that will take time for everyone to get used to. It shouldn't come as a surprise to see Wallace show his frustration, he showed some of it before the season even started. It will be interesting to see how talented the Celtics will look when Rondo returns, which could definitely be motivating Wallace's hard work.


"You can't be mad after [Wednesday's] result," said Wallace. "We got our first win with it, so it's something to ride. The whole shocking part about it is it's kind of new for me... it's a new process. Sometimes new things are confusing. Who know? This might be the best thing for my career."

Wallace went on to add:


"My thing about that is I don't ask for trades, I don't like being traded," Wallace said. "Once I get to a place where I'm comfortable, I just want to know what's expected of me and what my role is. For a guy that goes out and puts 110 percent of himself into it, your all and you just want to know that, this is nothing against [coach] Stevens. Everyone has to figure out how we need to play with each other and how we can play together defensively and offensively to get the best out of each other."

Hey, weather he's confused or unhappy, he's got my vote as one of the leaders on this team. One thing you can't say about this veteran is that he doesn't care. If anything, he might care a little too much.