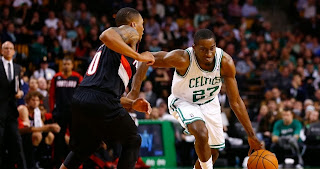 Boston-The Portland Trailblazers made their one and only trip to the TD Garden last night; with one goal to come out of there with a win. It had been nine seasons since the last Portland victory in Boston. LaMarcus Aldridge scored 27 points and added 12 rebounds, for his fourth straight double-double and beating the Celtics 109-96 in the process.


Nicolas Batum added 18 points for Portland, which won its fifth consecutive game. Terry Stotts spoke about the team's first win in Boston since 2004;

"I was happy for L.A. and Nic," said the Blazer's coach. "You always want to check those arenas off your list."

Boston won 13 of the previous 15 meetings against Portland. Jared Sullinger, who missed the last game with a bruised knee, had 26 points and eight rebounds off the bench for the C's as they have lost two in a row.
The Celtics trailed 94-80 early in the fourth quarter before Sully and Courtney Lee hit back-to-back 3 pointers to cut the deficit to eight points with 8:51 to play. The next two possessions resulted in no points and Dorell Wright hit a 3-pointer to make it a 12-point game and Williams hit a short fallaway jumper to make it 103-89.

Once again Brad Stevens' team was playing from behind almost the entire game and had this to say; 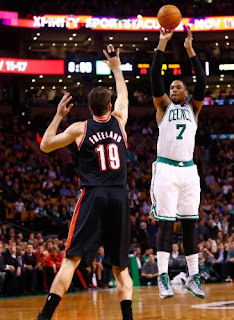 "Every team has a margin for error and not many teams have a big one,"  the Celtics coach said. "We can't take plays off; it's not going to work out well for us on either end of the floor. Those guys are going to make you pay if you relax. And they did."

Boston has allowed 105 or more points in three of it's last four games, winning two. After a six point deficit at the half, the Blazers outscored them 33-27 in the third quarter, and too many turnovers lead to easy buckets for the visiting team.

"You can't out score those guys. You're going to have to defend them," Stevens said. "We didn't do that very well."

Brandon Bass, Avery Bradley continued their shooting woes going for a combined 5-for-14 from the field scoring six points each. While the only other players who scored double figures besides Sully were Jeff Green and Jordan Crawford each shooting a not so impressive 4-for-12, resulting in 11 and 14 points each.
The Celtics will be in Minneapolis tonight as they are taking on the red hot Timberwolves. Tip-off is at 8PM.

Game Note:
The last Portland win in Boston was back on March 31, 2004 when the TD Garden was still the Fleetcenter and Darius Miles lead the way for the Blazers, and Ricky Davis was the high scorer for the Celtics.