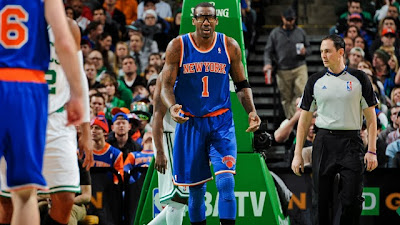 According to Jared Zwerling of Bleacher Report the Knicks are interested in sending Amar'e Stoudemire to Boston in exchange for a big man and others.

The report states that Celtics are looking to move Gerald Wallace and Kris Humphries to shave salary cap space for the future.

Center Tyson Chandler will be out for a significant amount of time and coach Woodson has restricted Stoudemire's minutes on the floor.

Knicks are desperate to move Stoudemire's contract for players who can come in and contribute this season. Carmelo Anthony can opt-out of his deal and become a free agent next summer.

There has also been talks that the Celtics could also look to move Courtney Lee's contract. Lee's contract keeps him in Boston until 2016.

Celtics should pass on this offer and wait for a better deal down the road. But tank-wise it makes things better for the Celtics. Wallace has emerged as a leader on the team who is Boston's best defender. Knicks will have to take Wallace's contract in order for the deal to go through.

If Danny Ainge pulls the trigger on this trade consider it a clear cut sign that he's aiming for a lottery pick in June.