Rondo wasn't cleared to play 3-on-3, did anyway 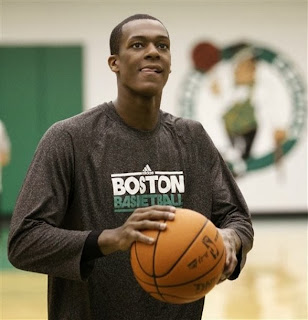 According to Celtics president of basketball operations Danny Ainge, Rajon Rondo has been playing basketball without the doctor's permission.

Danny Ainge told the Boston Herald that Rondo took part in 3-on-3 scrimmages a few weeks ago against doctor's orders.

"He played 3-on-3 when he wasn't supposed to," said Ainge. "But I asked [the training staff] if it was OK for him to be playing one-on-one, and the answer was yes. Of course playing one-on-one is one thing. It doesn't mean he's ready to play to the NBA standard." [Boston Herald]


Rondo's surgeon Dr. James Andrews has yet to make a decision on Rajon's current status. Rondo says he hasn't had time to book a trip to Pensacola, FL. due to Celtics' hectic travel schedule but plans to see Dr. Andrews soon.

Rondo is the best player on the Celtics who wants to return to action as soon as he can. A lot of people may look at this as Rondo being selfish by going against doctor's orders, but playing 3-on-3 isn't exactly one step away from being game-time ready.

Despite the injury, Rondo travels with the team and mentors his younger teammates, showing great leadership. A selfish player would have left his team and booked a flight to Florida as soon as possible to see his doctor. That's not the case with this Celtics all-star.

He still has a long way to go and we can trust Rondo to not rush back until he can play full 5-on-5 with no limitations.
Posted by Josue Pavon at 3:01 PM
Email ThisBlogThis!Share to TwitterShare to FacebookShare to Pinterest
Labels: blog, boston, causeway street, celtics, danny ainge, josue pavon, rajon rondo