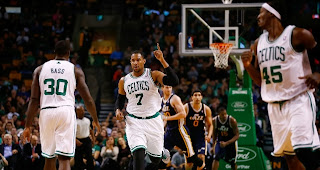 Boston - It's been a hell of a week for Celtics fans, as they've patiently waited for win number one in the Coach Stevens era, and avoided an 0-5 start for the first time since 1946.

After the first five minutes of Wednesday night's game versus Utah, it looked like more of the same from the previous seven days. But by the end of the night you saw a victory for the home team, its first of the young season, and a fifth straight loss for the Jazz as the final score read 97-87 at TD Garden.

Boston dug themselves into a hole quickly as they were down 16-3 in the first quarter and adjustments had to be made. Before you could say, 'here we go again...' the Celtics dished out 19 assists on 34 made baskets in the next 30 minutes. The unselfishness that was the key to this win, resulting in the C's shooting 49.3 percent from the field and 54 percent from behind the arc throughout the first three quarters, topping off a 25-point lead.

Brandon Bass scored a team high 20 points and Jeff Green added 18. The home crowd enjoyed its second game of the season, largely due to a second quarter where Utah was outscored 27-8.

Gerald Wallace chipped in with nine points and nine rebounds, while Jared Sullinger added 12 points, including a buzzer beating fade away to end the first half, and we can't forget the rook; Kelly Olynyk who went 14 and 8 in 29 minutes of action. Overall, the front court was impressive; grabbing 32 of the Celtics' 42 boards for the game. 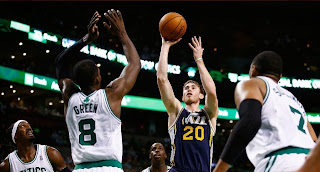 Celtics began the fourth quarter missing eight of nine shots, while Enes Kanter (22 points, eight rebounds) and Gordon Hayward (28 points, nine rebounds) cut into the deficit to make it 89-83 with just over five minutes left to play. But with a Bass jumper and a Sully baby hook to push the lead to 93-83, Boston never looked back and secured the win.


Co-owner, Wyc Grosbeck went onto the court after the final buzzer sounded to grab the game ball for coach Stevens, who celebrated his first win as an NBA head coach.


"I'm going to celebrate for a whole 12 minutes, and then I'm going to start watching Orlando and try to figure them out," said the Celtics coach. 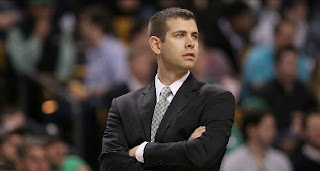 The game reunited Stevens, the former Butler coach with former Bulldogs star Gordon Hayward, who took them to the 2010 NCAA championship vs Duke where he missed the game winner from just inside half court. Gordon spoke briefly about seeing his former head coach:


"We exchanged greetings before the game," said Hayward. "But being the competitors we are, we both wanted to win [this] basketball game."

The Utah Jazz and the Denver Nuggets remain the only two win less teams in the league.

Meanwhile, Boston will travel to the sunshine state to take on Orlando and Miami in a back-to-back beginning on Friday night, as they try to add to the win column.

The Celtics ended its 289 home game sellout streak Wednesday night. Last night's attendance of 17,130 was short of about 1,500 fans. The streak dates back to the end of the 2006-07 season before the New Big Three era and their first championship in 22 years in 2008.