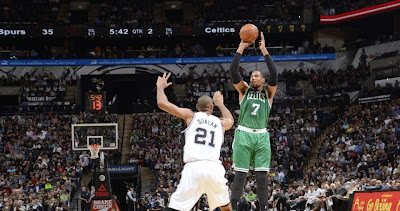 San Antonio – The Celtics were coming off a four game skid going into the AT&T Center last night and were handed another to add to the loss column.

The Spurs handed Boston its fifth straight loss and won its eighth straight, remaining undefeated at home and 10-1 overall.

Jeff Green, in his previous three games was shooting a combined 6-for-25 from the field but scored 19 points against San Antonio. Meanwhile Tony Parker scored his 19 points and dished out five assists; leading the way to a 104-93 win.

San Antonio had 27 assists and six players in double figures, rallying from a slow start to lead by as many 19 in the second half. Manu Ginobili who finished with five points and six assists, knows the importance of moving the ball, leads to better shots; 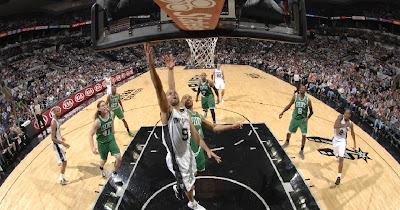 “Those moments when we start to play better ‘D,’ push the ball and be more aggressive, then it’s fun to watch, it’s exciting and it’s what we need,” the Spurs guard said. “We pass the ball really well. We penetrate and pitch, and everybody gets involved and that’s fun.”

There were 10 different lead changes and 14 ties in the first half, as neither team was able to maintain any momentum. But the Spurs shot 48% from the field and were 8-for-21 from behind the arc as Boston struggled to close on San Antonio’s shooters.

Jared Sullinger, who got his first start of the season, had a great night going 8-for-17 from the field putting up 19 points and grabbing a career high 17 rebounds. Sullinger said it was exhausting trying to keep up with the Spurs ball movement;

“Phew;” Said the Celtics forward “They’re a tough team to play. On any given night, anybody can go off. Honestly, they move the ball. They care less about scoring…They have go-to players but they hardly ever use them because they move the ball so well and play as a team, so they are hard to guard.”

Besides Sully’s double-double, Avery Bradley continued his great shooting going for 19 points, and Jeff Green finally broke out of his slump. 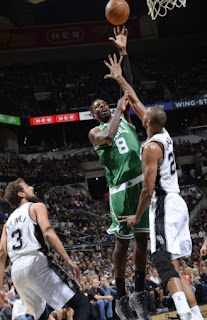 Brad Stevens was pleased with the first half production of his team as they were all tied 48-48 after the first 24 minutes, considering how poorly they played in Houston the night before.

“The team that played tonight could be a really fun group to work with,” said Stevens. “I think that’s what you take from here. We talked about this early in the year. There’s going to be nights where we measure progress a little bit differently.”

Boston couldn't slow San Antonio down when they began to pull away midway through the third quarter behind the great shooting of Kawhi Leonard (16 points) and Tony Parker. Leonard scored 10 of the Spurs first 12 points to start the second half and put his team up ahead 61-52 with eight minutes left in the quarter. The Celtics ended the period outscored 32-22.

Despite the Celtics’ defense slowing down, Tim Duncan, who went 3-for-13 from the field, and Parker sitting out the entire fourth quarter wasn't enough for Boston to make a comeback in the final 12 minutes. Danny Green (11 points) who had not made a single shot in the first half, woke up in the second half and so did the rest of San Antonio’s role players.

Boston will make a return to the Garden on Friday to face against the team with the best record in the Eastern Conference, the red hot Indiana Pacers. Tip off is at 7:30.

Game Note:
The Celtics continue to turn the ball over as they committed 17 last night (averaging 16.9 for the season), which lead to 20 Spurs’ points. San Antonio and Indiana have the league’s best record as they are the only teams to have lost only once at 10-1