Allen Still Getting no Love From Former Teammates 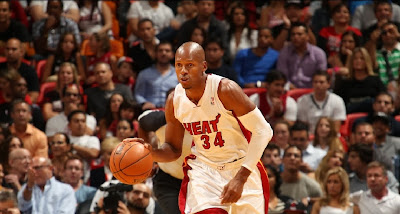 Someone once said that 'time heals all wounds.' I tend to disagree especially when it comes to matters of the heart. Just ask Paul Pierce and Kevin Garnett what does love and basketball have to do with each other.

It seems like so much time has passed since Judas formerly known as "Jesus Shuttlesworth" decided to run to sunny Miami for an easy championship.

I don't like to utter his name much these days (seriously, ask those close to me), I made that decision almost a year in a half ago and it looks like Pierce and Garnett may feel the same way.


"They haven't spoken to me," said Allen; speaking about Pierce and Garnett before Saturday night's game against Celtics.

Allen scored all of five points in 24 minutes while his team loss 111-110 on a play almost similar to something he could have executed years back. But hey, this is what he wanted; a reduced bench role. After watching his teammate Michael Beasley come in and score 10 points in eight minutes, he should come to the realization that his role will be less relevant as the season rolls on.

It's going to hurt him but apparently not as much as the reasons why Kevin and Paul still haven't spoken to #34. Allen truly believes there is no difference between him leaving as a free agent and them being traded because they determined their own fate.


"For them to be upset with me is disappointing because of how everything happened," said Allen. "That banner in 2008 is still going to be there and we're still going to be tied to it. Look, I have a feeling they were in the same predicament I was in this summer. Even Doc, he had to make a decision that was best for himself. I was in that same situation. I'm happy they were put into the same situation as I was." 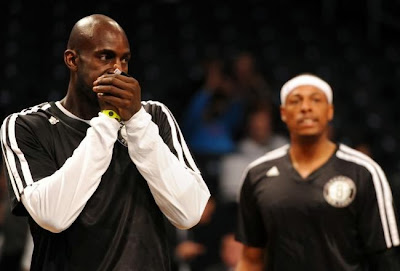 Is there really any surprise this guy just can't let this go? The only time he will make headlines this season is when he is going to be asked about Boston, and the past. He was not even a factor on Saturday night as Avery Bradley did as he pleased against him.

Clearly, he didn't get to really know "The Truth" and KG as the competitors that they are. All three are from the same era of 'everyone that is not on your team is the enemy.' If you leave your team to play for your rival, what did you expect was going to happen?

The two situations are not the same. Allen didn't wanted to be in Boston while Garnett and Pierce were forced to leave. In fact, they are on record stating their wishes to retire as Celtics. I don't recall Ray ever saying such words.

Allen is so concerned about what others thought of his decision, and he has felt 'persecuted.'


"I was curious to see how it was received in the NBA and the people in Boston," said Allen. "In my opinion it was the same scenario. I wasn't upset with any of those guys, it was their right. You have to make the choices you feel are best for your situation. That's why I was so disappointed in the reaction to me, because those guys know what it takes."

So let me understand this. He's disappointed that Boston fans will probably boo him until he retires because he left a $12 million two-year, no-trade clause deal on the table to play with LeBron for half as much? Yeah, I know I was doing cart wheels when I learned of that news. Really? Pretty sure we've been down this road before, I know how this movie ends. You made your choice; now accept the consequences of that choice. 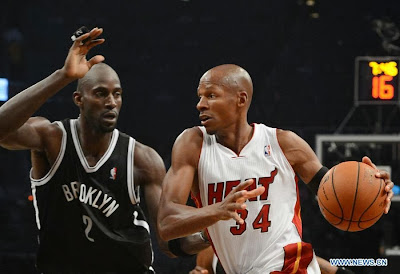 Why must you try to get fans to feel the same way about Kevin and Paul? Especially since they were sent to Brooklyn via a trade. It wasn't by choice and Danny Ainge wanted to rebuild, lets move on.

As for the no communication between the former teammates, it's warranted in my opinion for the simple fact that the Brooklyn Nets are contenders in the east. Why would Allen expect to get a phone call if he's still the enemy and now a defending champion? Did he think because Pierce and Garnett changed uniforms, their mindsets would change also?

Nothing changes. Live with it and enjoy it because you wanted this, sir. Public perception shouldn't be the same because the two situations are completely different no matter how much you want to disagree with it.


"There's a difference between perception and reality," Allen said. "I don't think anybody wants to go. None of us wanted to go."

The perception was No. 20 was all about winning banner 18 in Boston and beating Miami. Instead the reality was he preferred to take less money to go to South Beach and play in front of a half capacity arena, whom leave early during NBA Finals home games. Allen is just mad that anyone connected to the Celtics, and their fan base don't care much for him and he can't understand why? It's because they never forget. Especially not Garnett and Pierce; it's what makes them great. The love they have for the game and their teammates.

Maybe one day after they all three retire from the game they'll get together and reminiscence about the days of 'Ubuntu.' Until then as far as KG and 'The Truth' is concerned; all is fair in love and basketball.

Someone should really send Walter Ray the memo.