Doc, KG and Pierce say a break up was 'inevitable' 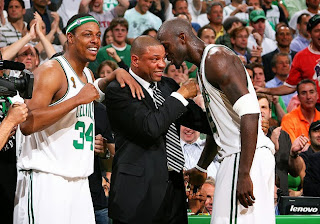 Los Angeles - What was suppose to be the first meeting between Doc Rivers and his former players, Paul Pierce and Kevin Garnett, ended up not happening at all.

Pierce out with a groin injury while Garnett missing in action due to an ankle issue, and were among four Brooklyn starters who sat out Saturday night’s Nets-Clippers game because of injuries. In fact the two future hall of famers were not even in the Staples Center to watch Rivers and L.A. beat Brooklyn. 110-103.

Doc remembers when the three were together during their Celtics days; Pierce or KG wouldn’t come to games they weren’t playing in. That habit continues now with the Nets.

Prior to the game when it was thought they would play on Saturday all three caught up with Marc J. Spears of Yahoo! Sports, to speak about Danny Ainge breaking up the band and a rebuilding situation without Doc.

“It wasn’t the first choice. Said Garnett. “It wasn’t likely… But I’m a chameleon. If I had to be in Boston for my last years without Doc, that probably would have been my last year of playing. More importantly, I hate to lose or be in that position.” [Yahoo! Sports]

Pierce shares that same sentiment, since he has been through that before;

“It probably would have been really difficult,” Paul added.

KG believes management was looking to go in another direction, especially after his name was brought up in serious talks last season with the Clippers, and of course after losing in the first round to the New York Knicks: 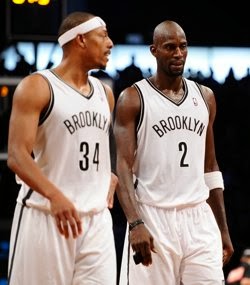 “The writing was on the wall,” said Garnett. “We all knew what the story was. I think Ray said it best, ‘None of us wanted to leave.’ I wanted to leave out in Green.”

After spending 15-years in Boston, for Pierce it was easier to depart with Rivers gone;

“Eventually it was going to happen,” Pierce said. “We knew eventually guys would go their separate ways, whether it was retirement or to another city.”

With the Celtics making headlines in the offseason, especially before the blockbuster trade with Brooklyn, Garnett thought that the three would land in Los Angeles;

“I actually thought I was going to L.A. to be honest. I thought [Rivers], I and Paul were going.”

Even “The Truth” thought he was going back to Cali to play in his hometown;

“At one point we thought we would all be in L.A.”

Regardless of how things played out before the start of the season and where they ended up, it is still clear that there is no love lost between the coach and his former players. They won a championship together in 2008, and returned to the finals two years later. There will always be an admiration for Doc and in vice-versa. 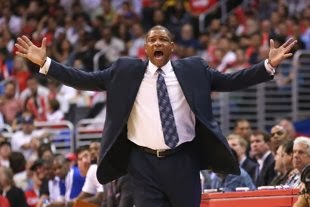 “I learned how to be a man, how to speak and how to communicate better than when I came in,” said KG. “He gave us confidence, we can do anything. Although he is well spoken and comes across really intellectual, Doc’s a beast, Doc’s an animal. There is nothing soft about him. He pushed us everyday.”

Paul played under Rivers from 2004 to 2013, raised a banner and won finals MVP during that span.

“I really grew to the player I’ve become and really matured under him through good and bad,” said Pierce.“Because of him, I’m the player I am.”

For Doc enough can’t be said when it comes to those guys, the feelings is mutual in more ways than one.

“When you win a NBA championship and when you go through the struggles you must go through together, you’re bonded for life,” Rivers told Yahoo! Sports. “It’s like having a blood transfusion. I’m not sure what they got from me, but I gained so much because I was lucky enough to coach them.”

Garnet and Pierce will have to wait until December 12th to reunite with their former coach, as they will host the Clippers at the Barclay Center. Either way they still keep in contact with Rivers since their departure from Boston.

“We still stay in touch,” said Pierce. “We still text back and fourth. We can hang out next summer because I usually train at the Clippers’ facility during the summertime. Maybe when I’m retired he can give me a job.”