Celtics President of basketball operations Danny Ainge made his weekly appearance Thursday on Boston's 98.5 The Sports Hub and said that the all-star point guard has been cleared by team doctors to participate in limited contact. 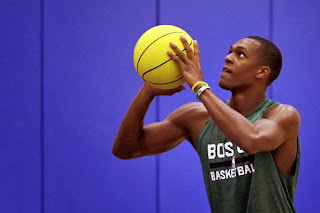 "Rondo is practicing, he's been cleared to have some contact, like 1-on-1, but not 5-on-5 full court practice yet, so we're just taking it week by week now," said Ainge. "But he's not ready to come back this week. I'm not sure when he'll be cleared but he's working really hard and we're anxious to get him ready to go."


Sounds like Rondo isn't too far from getting back but isn't exactly right around the corner. Soon after he's cleared for 5-on-5 contact he should be ready to hit the floor (hopefully). Rondo has been fitted for a knee brace, which he claimed was very light, which should be a good sign.


"I trust Rondo and I trust that he wants to play," said Ainge. "Ultimately, he's going to be the one determining that, not doctors and everybody else. He's a smart kid and if he's not comfortable mentally or physically, I trust that he'll make the right decision."