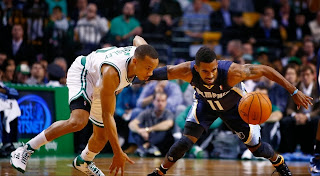 Boston- Memphis came in to the TD Garden 7-7 and playing without the NBA's reigning defensive player of the year Marc Gasol, who is out three to four weeks with a sprained left MCL. They already owned a win from a little over three weeks ago over the Celtics and after blowing a 19-point lead late in the fourth, the Grizzles were able to hold on 100-93 for a much needed W on the eve of Thanksgiving.


One would think that Memphis' inside scoring would suffer without their big man, but it was quite the opposite. Zach Randolph scored 13 points while Tony Allen and Ed Davis each had 12 and 11 points. Kosta Koufos who started in Gasol's place grabbed 13 boards while Randolph grabbed seven.


Jerryd Bayless, who has always played well against the Celtics scored 22 points off the bench and believes the team is playing well even without Marc;

"We're playing well. Everyone's contributing. We've got to continue to do that," Bayless said of the team's effort without Gasol. "We still have Zach and Zach's a premier big man in the league. We've got to continure to get him the ball and he's capable of doing great things."


Jeff Green lead the Celtics with 26 points, while Jared Sullinger started off slow but finished with 23 points(13 of which were in the fourth quarter) and grabbed 12 rebounds. Avery Bradley added 16 points, and not much offensivly was going Boston's way.


The Grizzles garbbed the lead in the opening minutes and never trailed the rest of the way, though the C's made a late charge in the last two minutes of the game.


The Celtics trailed 90-77 with under two minutes before Sully went off and Boston figured out how to guard the paint better.


"That's why it's a game of adjusting, changing," Celtics Coach Stevens said. "If you look at the game, you give yourself a chance to win. We were never quite back in the game."

After a 49-36 halftime deficit at the halftime, Boston cut it to nine three different times in the third quarter. But Memphis's interior scoring was too much as seven of their nine baskets in the quarter came from inside the lane. Mike Miller and Bayless each hit 3-pointers in the fourth before a pair of three pointers from Sully in the closing two minutes in a 16-7 Celtics' run and eight straight points from Sullinger.


"They just came out aggressively and our intensity wasn't there," said Jeff Green. "We allowed them to put us on our heels and that's how they got their early lead."


Despite a great late fourth quarter comeback, the Celtics needed more offense especially from Jordan Crawford (five points and seven assists) and Brandon Bass who shot a combined 4-for-14 from the field. Next game is on Friday at home vs the Cavs and then back on the road on Saturday vs the Bucks before the worst month schedule wise comes to an end.


Courtney Lee sprained his left knee in the second quarter and did not return, while Kelly Olynyk missed his third straight game with a sprained right ankle. Jeff Green addressed the home crowd at center court before tip-off, wishing everyone a Happy Thanksgiving!