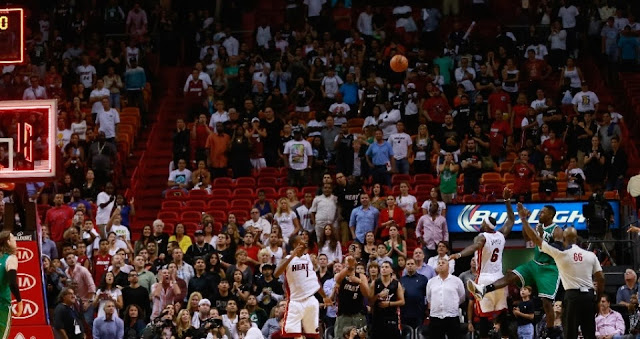 Miami- It was all hugs and smiles when the Celtics entered American Airlines Arena coming off of back-to-back wins, and they exited with the same expression on their faces after Jeff Green made the biggest shot of his career to knock of the Miami Heat.


Gerald Wallace in bounded a perfect pass to Jeff Green with .6 of a second left on the clock for a buzzer beating three pointer in LeBron James's face, topping the Heat 111-110 and broke the hearts of the home crowd.

After a come from behind win in Orlando the night before, they did it again in shocking fashion against the defending NBA champion.

Jeff Green, who had a team-high 24 points, went 5-for-8 from three point land and executed the most unbelievable play of the young NBA season thus far. Avery Bradley was still in disbelief:


"Jeff made a huge shot," said Bradley after the game. "It's crazy." 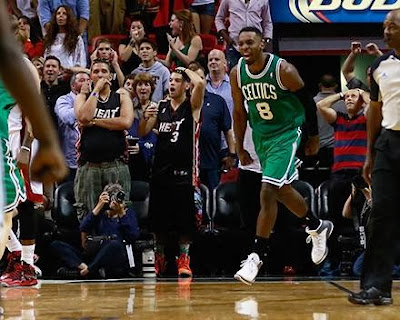 It was an exciting game from the opening tip as Boston wanted to keep its momentum rolling and prove they can go toe-to-toe with the two-time defending world champs despite the change in personnel or the fact they're without its floor leader, Rajon Rondo. The results; winning its third consecutive game and shocking the basketball world Saturday night.

James scored 25 points and made what he thought would be the final two free throws and the nail in the C's coffin after he was fouled with 3.6 seconds remaining and gave Miami a 110-106 lead.

A play that was drawn up for Gerald Wallace led to a quick layup and Boston trailed by two with only one second left on the clock.

Needing to commit a foul in hopes that Miami would at least miss one free throw, Dwayne Wade (18 points) answered the call after being fouled in 0.4 seconds. He missed the first free throw, and thought he could outsmart these young Celtics by purposely missing the second attempt and letting the clock run out. That seemed like a good idea in theory except Wade hit nothing but backboard. You can not do that.

Free throw violation was called and Boston was given one more chance to at least send the game into OT or get the win. Coach Stevens couldn't have wished for a better scenario:


"I just had it written down," Stevens said of the game's final play. "I've never ran it before, but we've had some variations of it."

Celtics fans were use to the previous regime and plays being drawn up on the fly but this was nothing short of pure genius for the youngest coach in the NBA. 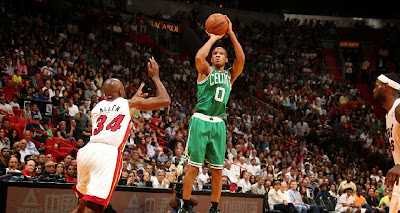 Stevens used Avery Bradley (8-for14, 17 points) and Jordan Crawford (6-for10, 15 points), who was on fire all night as decoys. Jeff Green ran off of a screen from rookie Kelly Olynyk and Green caught Wallace's pass in the corner for the game-winning three pointer.


Swish... cue the ESPN highlight reel and a full on celebration.

Jeff's shot couldn't have even been stopped by LeBron James' long arms as time expired, Stevens and the Celtics pulled off the miracle.


"I just shot my regular shot and just trusted that it would go in," Green said after the game. "It was suppose to be a 2, but I told Gerald I wanted to shoot the 3 to try to win it."

Wallace had no issues with Green's wishes, and trusted that something great was going to happen.


"When he let go I just had the feeling that it was going to go in," said Wallace, who dished out a team high 7 assists. "It looked good, I felt good about it. It seemed like everything went right for us that last minute of the game, so it was just kind of like this was our time and he was able to make it."

Since Wallace's comments Wednesday night about coming off the bench, it's done nothing more than work wonders for this team. Three straight wins (3-4 overall) and a Florida sweep. Celtics return Monday night when they take on the Magic once again. Let's see what else coach Stevens has up his sleeve as they'll try to make it four in a row.

The Celtics won the battle of the boards 39-31 and committed only 12 turnovers. Celtics average 18.3 turnovers this season. Boston's bench outscored Miami's 51-34. The only solace the Heat had was the fact that they went to the charity stripe 34 times for 24 points while Boston went to the line a total of 12 times and made nine of them.