Ainge: 'Embarrassing' for LeBron to complain about NBA officials 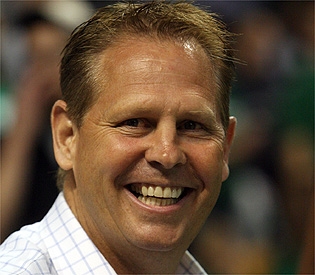 Celtics president of basketball operations Danny Ainge made his weekly appearance on WEEI 93.7FM's Salk & Holley Thursday afternoon and had a few words to say about LeBron James's recent comments regarding the officiating in Wednesday's game between the Heat and the Bulls.

During the game, Chicago's Kirk Hinrich was very physical with James on the defensive end. In one particular play, Hinrich gave James a hard foul that was later responded to in a separate play on the other end of the floor. James was hit with a flagrant 1 for a shot he put on Chicago's Carlos Boozer. He had a few words to say after the game regarding the officials.


"It's been happening all year, and I've been able to keep my cool and try to tell Spo (Heat coach Erik Spoelstra), 'Let's not worry about it,'" James said. "But it is getting to me a little bit. Every time I try to defend myself, I've got to face consequences of a flagrant foul or a technical foul or whatever the case may be. It's tough. It's very tough."

Ainge was asked what he thought about James's recent comment and had this to say:


"I think the referees got the call right. I don't think it was a hard foul (Hinrich's foul on James)," Ainge said. "I think the one involving LeBron against Boozer, that was a flagrant. I think the officials got it right. I think that it's almost embarrassing that LeBron would complain about officiating."

Most of Celtics Nation would agree with Ainge, are you kidding LeBron? There isn't another player in the league that gets more calls than you and because the Bulls ended the streak, this is how you vent your frustration?

The only thing more embarrassing than LeBron complaining about getting calls will be the NBA giving him more calls because of his words of frustration towards the officials.


"Not surprised about anything that comes from Boston," James said. [The Palm Beach Post]